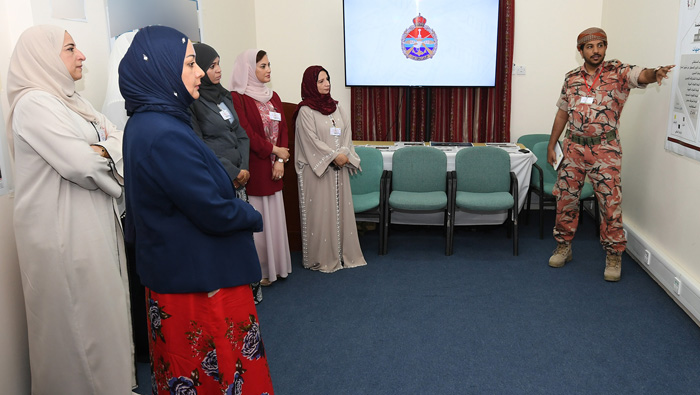 Muscat: A number of female members of the State Council and Majlis Al Shura yesterday visited the joint military commnads of Swift Sword 3. The military exercise is being conducted with the Royal British forces.
On their arrival, they were received by Lt. General Ahmed bin Harith Al Nabhani, Commander of the Sultan’s Armed Forces ( Director of the Exercise), Major General Matar bin Salim Al Balushi ( Commandant of the Joint Forces); Air Vice Marshal Matar bin Ali Al Obaidani, Commander of the Royal Air Force of Oman (Chief of the Exercise Control) and Rear Admiral Abdullah bin Khamis Al Raisi, Commander of the Royal Navy of Oman (Deputy Director of the Exercise) and a number of officers. They were briefed on the exercise control, the joint command , the activities of the exercise and the upcoming stages. They also toured the sections of the media centre and acquainted with the role the centre plays in the field of media coverage and documentation of the activities of the exercise.
The Morale Guidance at the headquarters of the Sultan’s Armed Forces will hold today a joint press conference with the Omani and British forces to shed light on the final stage of the Joint Exercise Swift Sword 3 .