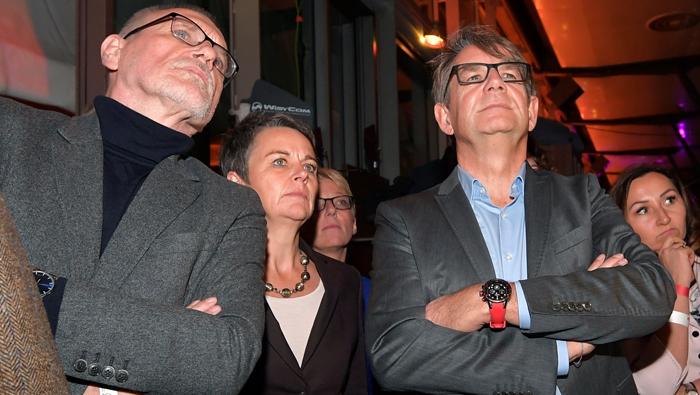 Berlin: Chancellor Angela Merkel's conservatives and their Social Democrat (SPD) coalition allies in Berlin both haemorrhaged support in a regional election in the western state of Hesse on Sunday, dealing a fresh blow to the fragile national government.
Merkel's conservative Christian Democrats (CDU) came home first but polled just 28 per cent of the vote, an exit poll for broadcaster ARD showed. That marked a big drop from the 38.3 per cent the CDU won at the last Hesse election, in 2013. The SPD won 20 per cent, down from 30.7 per cent in 2013, and pushed the ecologist Greens, on 19.5 per cent, into third place.
The result suggests the CDU and Greens could continue their ruling coalition in Hesse but is likely to increase tensions in Merkel's ruling 'grand coalition' in Berlin.
Merkel's fourth and probably final government has already come close to collapsing twice, and the weak SPD performance in Hesse will almost certainly reignite a debate in the party about whether it should pull out of the coalition.
A growing number of SPD members feel their centre-left party is tarnished by its alliance with Merkel and would be best to rebuild in opposition - a scenario SPD leader Andreas Nahles has resisted. Merkel's conservatives formed their loveless national partnership with the SPD in March only after the collapse of talks on a three-way coalition of the conservatives, Greens and pro-business FDP.