Open-mindedness is the secret of my success, says Oman artist 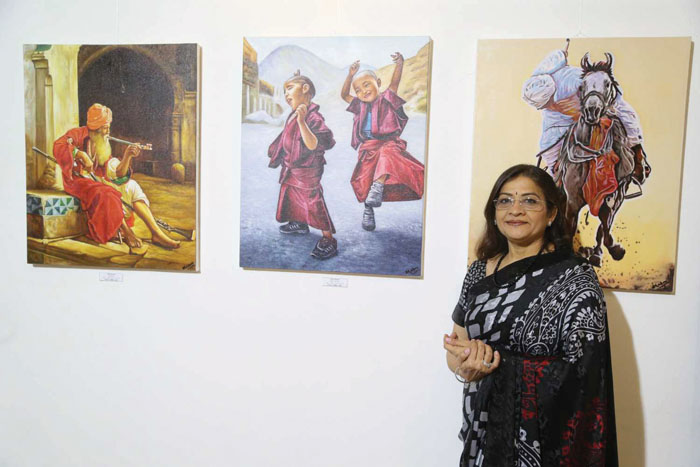 MUSCAT: An artist who’s been practising and showcasing her work in Oman has said that it is important for those who want to pursue their passions to be open-minded and receptive to criticism, if they want to grow. Sonal Shah, who has been a resident of Oman for the last 30 years, shared her works with the public at an event titled “Wednesday on Walls”, in collaboration with fellow artist Ila Raval. Their artworks will be displayed throughout January at the Majlis Art Café at City Seasons Hotel in Muscat.
“I think I had some creativity inside me right when I was a child, and I think I wanted to explore it further, so I thought of doing paintings on canvasses,” said Shah, speaking to Times of Oman. “I felt I had a knack for it so I thought I’d decide to try it out. Honestly, when I first started out 10 years ago, I never thought I’d have my own exhibition one day.”
**media[988603]**
She added, “I have taken part in exhibitions previously, but I was only displaying two or three of my own artworks alongside many other artists, but this is the first time I have had an exhibition like this one. I think my painting projects a lot of texturing and 3D on it, so you will find a lot of mixed media on it, so I think that is my speciality.”
Dream come true
The event, which features works from both artists who have showcased the best of their paintings, that have required plenty of their patience, time and dedication, features a number of installations that can be bought by members of the public. The event was inaugurated by Reem Noor Al Zadjali, one of the first registered female lawyers in Oman.
“I used to do acrylic for many years, but these days, I am more into the use of oil and painting, but I still haven’t lost my passion for texturing and mixed media, so I do a lot of mixed media,” recalled Shah, speaking to the Times of Oman.
**media[988604]**
“One of the most common questions I’ve been asked is how I switched to painting on the canvas, because a lot of the work I used to do dealt with charcoal and dry paints, so venturing out here has happened because Oman has given me this opportunity and I have a lovely artists’ group that has inspired me to put my work out here.” Although she has now reached a stage where she is able to independently publish works, Shah has said that her achievements are in part due to the teachings she received when she first began exploring her artistic interests.
“It wasn’t that difficult, to be honest, because I had a very good teacher who taught me everything from the basics onwards, so any doubts I had were cleared up very early on,” she admitted.
“I did have a few hurdles along the way – my son is my biggest critic – and he would correct me and tell me what to do. I took whatever positivity I could from this feedback and used it to improve my paintings.” “I have learned to be more open-minded to criticism and suggestions, and to be more aware of learning, because what I was 10 years ago, is not what I am today, and the friends who have seen me grow have said that there has been a vast difference since that day and today,” added Shah. “To all those who want to pursue their passions, I would say go for it and make your dreams come true. “