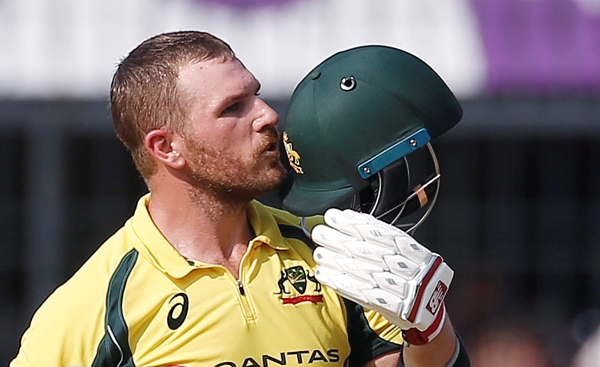 SYDNEY: Australia have dropped test skipper Tim Paine from their one-day squad for next month's series against South Africa and named opening batsman Aaron Finch as captain in his place.
Finch, who led his country's Twenty20 side to a 11-run defeat to Pakistan in Dubai on Friday to go 2-0 down in the series, will be supported by two vice captains in Josh Hazlewood and Alex Carey, echoing the test structure.
Carey replaces Tim Paine as wicketkeeper in the 14-man squad for the three-match series which begins in Perth on Nov. 4 and also includes matches in Adelaide and Hobart.
"We expect Aaron, Josh and Alex to lead the side through a big Australian summer... they'll also be driving our standards and values as we prepare our defence of the World Cup, which is only seven months away," chief selector Trevor Hohns said in a news release.
"We believe the squad we have selected will give us a great opportunity to not only be competitive at home this summer, but it also allows us to start to build continuity leading into next year's tournament."
Hazlewood returns to action for his country along with fellow quick Pat Cummins after both skipped the test series against Pakistan because of injury.
The third member of Australia's much-vaunted pace attack, Mitchell Starc, returns to white ball cricket after missing the series in England earlier this year and despite an injury scare during the Pakistan test series.
Steve Smith and David Warner are still banned for their part in the ball-tampering scandal during the test series against the Proteas in March, giving the batting line-up an unfamiliar feel.
Finch, Travis Head and Marcus Stoinis look set to be the first three names on the list with Shaun Marsh retained at number four despite his poor test form.
Changes to the squad from the England tour include the inclusion of quick Nathan Coulter-Nile and top order batsman Chris Lynn, who will get a chance to earn his second ODI cap nearly two years after his first.
Mitchell Marsh, the test vice captain, and off-spinner Nathan Lyon were omitted from the squad but Hohns said they had been rested.
"We have made the decision to manage Mitch Marsh and Nathan Lyon carefully to ensure they are in the best condition possible to put their hand up for selection either later in the summer or for the World Cup next year," he said.
Squad: Aaron Finch (captain), Alex Carey (vice captain), Josh Hazlewood (vice captain), Ashton Agar, Pat Cummins, Nathan Coulter-Nile, Travis Head, Chris Lynn, Shaun Marsh, Glenn Maxwell, Darcy Short, Mitchell Starc, Marcus Stoinis, Adam Zampa