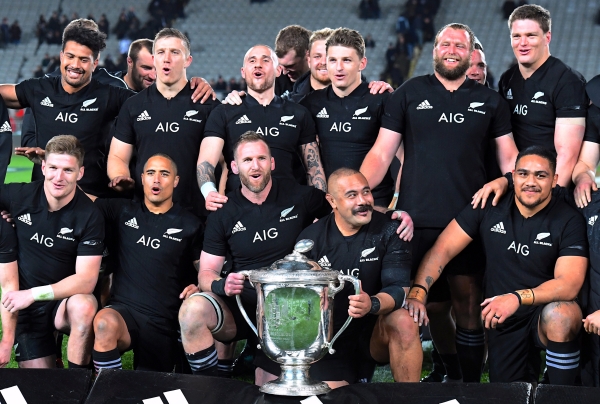 YOKOHAMA, Japan: All Blacks flyhalf Beauden Barrett scored 17 points as New Zealand completed a Bledisloe Cup clean sweep with a 37-20 win over Australia at the venue for the 2019 World Cup final on Saturday.
Flanker Liam Squire and captain Kieran Read crossed before the break to put the All Blacks in a commanding position and the world champions piled on the points in the closing stages when Australia were a man down.
Australia replacement hooker Tolu Latu was sinbinned for striking his New Zealand counterpart Codie Taylor on 66 minutes and tries from outside backs Ben Smith and Rieko Ioane completed an emphatic victory.
"It was a good start (to the tour)," said New Zealand coach Steve Hansen, whose side face Japan next week before heading to Europe.
"Australia play different to what we are going to be playing in the next couple of weeks but they are a formidable opponent and on their day can play very well.
"So it was important we start the tour with a good performance and we did that tonight."
New Zealand had won the first two tests between the trans-Tasman Sea rivals in the Rugby Championship in August to be assured of retaining the Bledisloe Cup for the 16th straight year.
The Wallabies, with plenty to prove after a poor season, exploded out of the blocks in front of 46,143 fans in Yokohama and almost scored in the second minute only for fullback Dane Haylett-Petty’s effort to be ruled out by the TMO.
After that, New Zealand took control, dominating possession and territory throughout the first half and opening the scoring on 11 minutes when Squire broke through Kurtley Beale’s tackle.
Plagued by errors and penalties - Australia conceded 11 to New Zealand's five - the Wallabies allowed their opponents too much turnover ball and, as usual, the All Blacks punished them.
After penalties apiece for Beale and Barrett, number eight Read peeled off the back of a scrum in the 36th minute and ran through Ned Hanigan's tackle to extend New Zealand’s lead to 17-3.
Early pressure
The Wallabies hit back just before halftime, though, with winger Sefa Naivalu barrelling clean through Barrett to score in the corner on the last play of the half.
Back in the game at 17-10, Michael Cheika’s team piled on the pressure early in the second half but they had to settle for an early penalty after lock Rob Simmons was held up under the posts.
It was then that Barrett took control of the contest, slotting his second penalty before linking up with Ioane to score the try of the match on the hour mark - his sixth against the Wallabies this year.
Already up against it, Australia's hopes of getting back into the contest suffered a fatal blow when Latu was sin binned for a retaliatory swipe at Taylor.
Further tries from Ben Smith and Ioane, his 11th of the year and 22nd in 21 tests, either side of Israel Folau’s consolation score for the Australians wrapped up another comprehensive win for Hansen’s men.
"Devastated? That’s a big word," Wallabies coach Cheika, who led his side to the 2015 World Cup final and a victory over the All Blacks in the third Bledisloe Cup test last year, told reporters.
"I care a lot. I care about my team, the players and about rugby in Australia.
"One thing that comes with care is fight and whatever is necessary (to beat New Zealand) we will make sure we get it done before we meet them again."