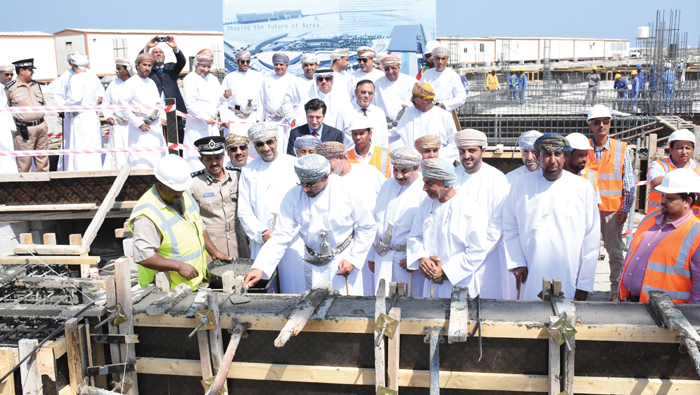 Barka: The foundation stone of Barka Marina development project was laid yesterday in the Wilayat of Barka, along with the announcement of the actual commencement of the project.
The ceremony was sponsored by Sheikh Hilal bin Said Al Hajri, Governor of South Al Batinah, in the presence of Dr. Hamad bin Said Al Oufi, Undersecretary of the Ministry of Agriculture and Fisheries, and a number of excellencies and officials.
Nasser bin Salim Al Siyabi, Executive Vice- President of Falcon Investments, said that the investment cost of the project is OMR50 million, adding that 70 per cent of the project’s deep foundations were completed in the commercial area.
He added that the project consists of different stages, to be implemented and opened over four years, as the project includes many service, commercial, tourism and entertainment facilities.
The ceremony included a presentation of the three stages of the project. It also included honouring of the sponsor of the event to honour a number of collaborators in the project and laying of its foundation stone.
It is worth mentioning that the project is located on a total area of 1.336,213 square metres. The actual area of the project is 115,200 square metres. The building area is 105.000 square metres. The leasable area is 40.000 square metres and the number of commercial units is 450 units.
The first and second stages will be opened by 2021 and the third stage in 2022. The project includes a number of recreational and service facilities.