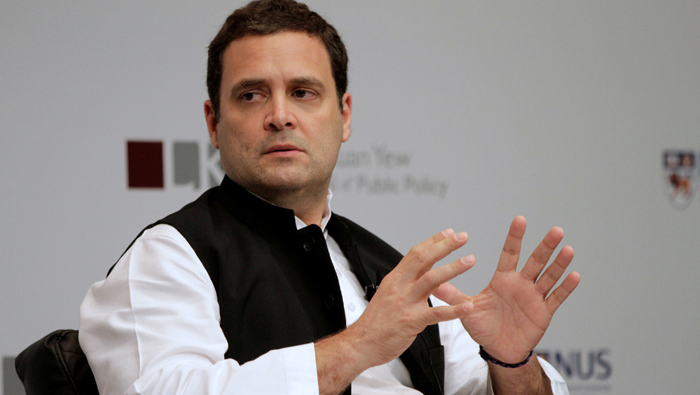 New Delhi: India's main opposition Congress party said on Monday it would not name its leader Rahul Gandhi as the prime ministerial candidate of an alliance seeking to defeat Prime Minister Narendra Modi in next year's general election.
Congress is working to build an opposition front with other parties in preparation for the vote, and spokesman Sanjay Jha said it would respect the "aspirations" of potential alliance partners though no alternative candidates will be nominated.
Jha said the party would be following the same strategy as it did in 2004 when its alliance defeated a coalition led by Modi's Bharatiya Janata Party (BJP) without formally naming a prime ministerial nominee.
"Defeating the BJP is our primary goal, and therefore the Congress party is going to be very politically accommodating because we believe that regional parties' aspirations and their ambitions will have to be respected depending upon relative strengths in different areas," he told Reuters on Monday.
Many of Congress's potential alliance parties are run by ambitious regional leaders with years of governance experience. Echoing Jha's comments, senior Congress leader and former finance and interior minister Palaniappan Chidambaram said the party's main focus was on forging an alliance to win the election, due by May 2019.
"We want to form a coalition, make it win and then the parties involved will decide who becomes prime minister," he told TV channel News18 Tamil Nadu in an interview broadcast at the weekend.
Rahul, 48, is a scion of the Nehru-Gandhi dynasty that has ruled India for nearly four decades since its independence from Britain in 1947. Unlike Modi, a powerful orator who ran the western state of Gujarat before becoming prime minister, Rahul has never held a ministerial position despite being a lawmaker since 2004 and critics question whether he has the charisma or experience to defeat Modi.
The decision by Congress not to impose Rahul Gandhi's candidacy could also be exploited by Modi to suggest the opposition alliance is indecisive and not fit for government, political analysts say.
It comes as the party struggles to hold together a so-called "grand alliance" ahead of not only next year's national vote but a series of state elections this year.
Modi, meanwhile, is being buffeted by a jobs crisis and farm distress. An opinion poll by TV channel Times Now predicted in August that nationally Congress would raise its seat count in the lower house of parliament next year to 78 from 44 in 2014.
The BJP is projected to continue its lead over other parties, though its seat strength could fall to 227 from 282 at the last election. A party needs to win 272 seats for a simple-majority out of the 543 seats in fray.