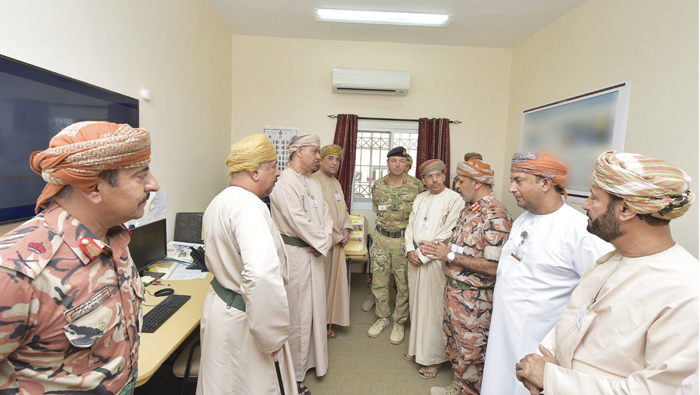 Muscat: Dr. Abdulmoneim bin Mansour Al Hassani, Minister of Information (official spokesman of Al Shomoukh 2 and Swift Sword 3 Military Exercises) and a number of members of the State Council, undersecretaries and retired senior officers visited the command centre of the joint military exercise Swift Sword 3.
On their arrival at the at Muaskar Al Murtafa’a, they were received by Lt. general Ahmed bin Harith Al Nabhani, Commander of the Sultan’s Armed Forces (SAF), Air Vice Marshal Matar bin Ali Al Obaidani, Commander of the Royal Air Force of Oman (Chief of the Exercise Control) and Rear Admiral Abdullah bin Khamis Al Raisi, Commander of the Royal Navy of Oman (Deputy Director of the Excercise).
The visitors were briefed on the tasks and duties of the joint command and their plan and the military exercise in progress.
Media role praised
During the visit to the media centre and the command centre, Dr. Abdulmoneim bin Mansour Al Hassani, Minister of Information praised the role of media in management of the military exercises and in educating the public about national causes and matters. “We were proud of the tremendous efforts of the Sultan’s Armed Forces and the other military and security apparatus,” the minister said.
He also praised the cooperation among all media and civil institutions and the role of the Morale Guidance at the SAF Headquarters in provision of the information to all media institutions, which he said was of vital significance to the local and international community. He also stressed the role the media plays during armed conflicts.