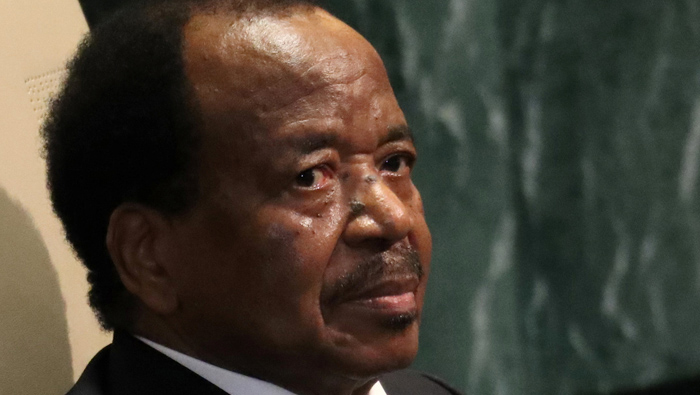 Yaounde: Cameroonian President Paul Biya has won re-election by a landslide, the Constitutional Council said on Monday, extending his 36-year rule amid opposition claims of voter fraud.
Looming over his victory is a secessionist uprising in the Anglophone Northwest and Southwest regions in which hundreds, including civilians, have died in fighting between the army and militia groups.
At 85, Biya is the oldest leader in sub-Saharan Africa. The win gives him another seven years in power and cements his place as one of Africa's longest serving rulers.
Most Cameroonians have known just one president. He won 71 per cent of the vote but opposition candidates said the election was marred by ballot stuffing and intimidation.
The Constitutional Council last week rejected all 18 petitions claiming fraud. "The results were known beforehand. They do not reflect reality in Cameroon," said Cabral Libii, an opposition candidate who came third with 6 per cent of votes.
Monday's official results showed Biya winning with a big margin in nine of 10 regions, and the announcement of his victory was greeted with cheers and shouts in the assembly hall.
In the South and East regions he won over 90 per cent of the vote. His closest rival, Maurice Kamto, won 14 per cent overall. The announcement follows two weeks of tension in the coffee and oil-producing country where, despite steady economic growth above 4 per cent a year since the last election, most live in poverty.
Kamto claimed victory for himself on October 8 based on his campaign's figures. In recent days, police silenced opposition marches in the port city of Douala, where Kamto is popular. Authorities have defended the process.
"The election was free, fair and credible in spite of the security challenges in the English-speaking regions," said the President of Constitutional Council, Clement Atangana, on Monday.
The secessionist movement started over a year ago in reaction to a heavy handed government clampdown on peaceful protests calling for an end to the marginalization of Cameroon's English-speaking minority.
Police killed civilians, sparking further protest. The army burned villages and killed unarmed civilians, residents told Reuters, forcing thousands to flee either to the French-speaking regions or into neighbouring Nigeria.
Ghost towns are all that remain of once vibrant cities in those regions. Voter participation was 5 per cent in the Northwest and 16 per cent in the Southwest. In an area of 5 million English speakers, less than 100,000 voted. Despite the unrest, and a desire among the young for change, the opposition appeared unable to mount a credible challenge to Biya who, despite long absences abroad holidaying in Switzerland, has kept core support. He has also benefited from political apathy from many who do not see any point in voting. "I voted for the opposition even though I did not trust them. I wanted anything but Paul Biya," said Jerome, a 32-year-old librarian who has been unable to find work.
"My three children will have no future as long as he is there." The only current African president to have ruled longer than Biya is Equatorial Guinea's Teodoro Obiang Nguema Mbasogo.