​Locals rescue expats from wadi after flash floods in Oman 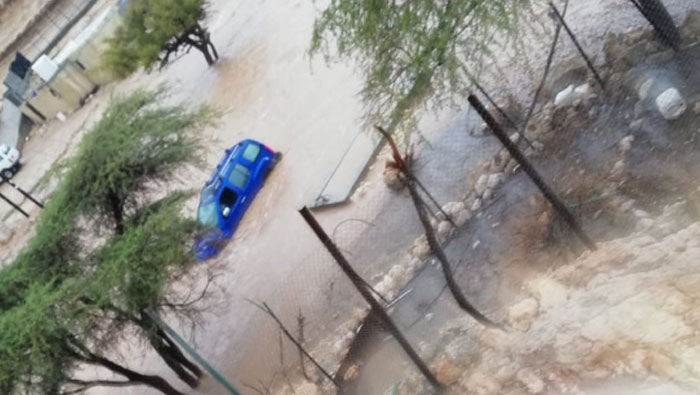 Muscat: A group of expats were rescued by local men in Wadi Al Quran after their car got carried away in a flash flood in Tiwi.
On Saturday afternoon, Hamed Al Hussaini came to the help of residents after he saw a woman climbing up a tree in the Tiwi mountains.
“At around four o’clock, it began raining, me and other local men were sitting outside when we saw cars stuck in the wadi. We then saw a woman inside the car, when the car got closer to the tree, she held on to the tree and got out of the car,” Al Hussaini said.
Stuck in caves
“We helped her down from the tree and I brought her to my house, I then asked her if there was anyone else, and she said her friends were stuck in the caves next to the mountain,” he added. The mountains surrounding wadi Al Quran are known to have small caves on the side of the mountains.
**media[950867]**
Tough rescue operation
“When she told us where they were, we went to help them. It was hard walking up the side of the mountain because the wadi was under us, but two other men and I managed to help them all,” we talked
The entire operation took about an hour and a half, according to Al Hussaini, and all the expats were brought back to his house where he provided them with warm clothes, tea, coffee, and some food.
Describing what took place before help came, one of the expats said, “We got to the edge of the road and we checked the map and it showed that there was a road ahead. It didn’t look like a wadi, it was just a small stream of water. But we decided not to pass through it, however as soon as we started reversing, a flash flood came.”
There were about four expats in three different cars on their way to fins. One group went to check the water level and some were left behind.
“As soon as the flood came, we got out of the car, and began climbing up to a higher ground, we then saw the local guys. They were very hospitable, they gave us food and warm clothes,” he added.
“We live in Muscat, and we go on road trips quite often,” said one of the expats, “We always follow the rule of not crossing wadis from ROP which is why we decided to reverse but the flood came so fast.”
Some of their belongings were lost in the wadi, “I lost my wallet,” said one of the expats.
“In the morning, we will leave to go find the car and toe it back to Muscat,” said one the expats. “We can see our car from the house but the question now is how to get to it. We would like to thank Al Hussaini specifically for his kindness and hospitality.”