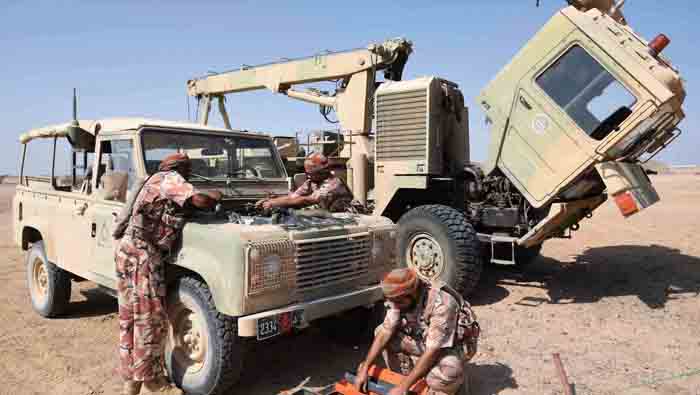 Muscat: Major General Matar bin Salim bin Rashid Al Balushi, Commander of the Royal Army of Oman (Commander of the Unified Joint Forces) accompanied by Stewart S., Commander of the British Force (assistant commander of the unified joint forces) paid a field visit to the Omani - British Military Commands in the land operations area on Saturday.
The visit was aimed at activating the plans and procedures of the Omani British Joint Military exercise (Swift Sword 3).
They also got acquainted with the preparations of the joint exercise.
While the commanders were briefed on the achievements and duties carried out during the exercise, they hailed the efforts of the forces in the operations area.
The activities of the Omani British Joint Military Excercice (Swift Sword/3) continued with the participation of the Sultan’s Armed Forces (SAF), the security and civil apparatuses besides the participation of the British Royal Forces to ensure the success of the exercise.
The units and departments of the Ministry of Defence and the SAF wings are employing all human and technical capabilities in the operations as planned. The Engineering Services at the Ministry of Defence provides all basic services along with maintenance of the military facilities.
The SAF Signal Wing is providing all communication services to the forces deployed in the operations area.
The SAF Medical Services is providing field medical supplies for all the forces.