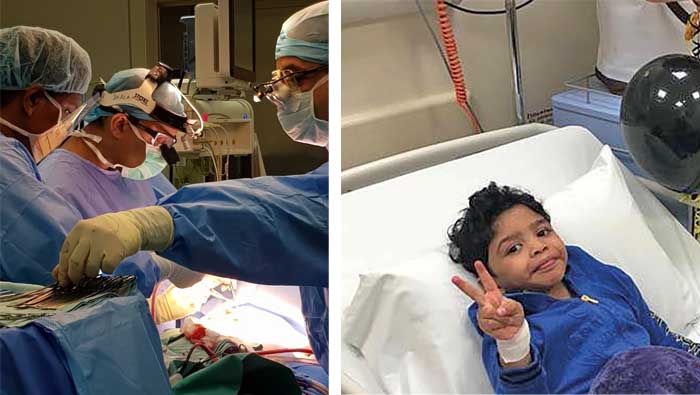 Muscat: A marathon effort to conduct open heart operations on more than 40 sick children has been hailed a brilliant success, with overjoyed parents thanking Oman and its surgical teams for helping to heal their little ones.
A team of more than 100 healthcare professionals performed open heart surgeries on 41 children over a 10-day period. They worked tirelessly from dawn to dusk and used four operating theatres to help treat the sick youngsters, under a scheme called Accelerating Open-Heart Surgery for Children at the Royal Hospital’s National Heart Centre.
The programme aims to accelerate open-heart surgery for the children who suffer from congenital heart defects and to reduce the waiting lists for operations and appointments.
The Sultanate’s surgeons joined forces with specialists from Australia to complete the treatments.
Mum Lamya Al Harthi, whose son Mohammed was part of the historic surgery at the Royal Hospital, told Times of Oman: “I am so grateful to the hospital staff for taking such great care of my child, and all the other children, involved in the programme.
“We discovered a hole in my son Mohammed’s heart when he was three-year-old. I knew that there were children who suffer such heart problems at birth, and the hole usually closes by itself after a short period of time, but in Mohammed’s case, the hole was too large and so it needed treatment either by catheter or surgery.”
Al Harthi expressed her gratitude to the staff at the Royal Hospital adding: “The hospital staff were very helpful, they supported us emotionally, and always kept us informed.”
Al Harthi was able to leave hospital with her son three days after surgery. She added: “My son’s operation took three to four hours. After he left surgery , he was under anesthesia. He woke up the next day and began to respond. On the third day he started moving and we discharged from the hospital.
“I would also like to thank Dr. Alaa Lawati who performed the operation on my son. He continuously visited us to reassure us of Mohammed’s condition, sometimes he even came to see us over four times a day.”
The programme also included doctors from various specialisations, allied health groups, medical staff from in-patient wards, operations, ICUs, laboratories, technical support, and administration departments, in addition to a voluntary medical team from Australia specialised in heart diseases.
“The demand on our service has been increasing over the last few years due to early detection and diagnosis of congenital heart disease. All these factors have improved the rate of survival for those patients,” an official from the National Heart Centre said.
On the process of selecting patients, the official said: “We choose patients according to their clinical priority and urgency where those requiring more urgent procedures are done first.”
27 additional surgeries
Usually, the rate of open heart surgery is 14 surgeries in two weeks but because of the programme, the centre performed 27 additional surgeries.
“The number of surgeries conducted each day depends on the case complexity but, on average, three to five surgeries were completed per day during the project period.”
In general, an open heart surgery takes on average three to four hours to perform, with some procedures lasting up to seven hours or more.
“The National Heart Centre is planning to repeat this project in the near future to further reduce our patients’ waiting time,” the official from the Royal Hospital added.
Osama Al Shamaki was one of the 41 children in the programme, his mother Zamzam Al Hinai described how she felt during the six hour waiting period of her son’s surgery.
“I was so scared and nervous, I cried and prayed that Allah would return him to me safely and in better health than before,” she said.
18-month-old Osama suffered from heart problem as Mohammed.
“We were told that he would have the surgery on the third day of Eid,” Al Hinai added.
“I would like to thank Dr Alaa very much for standing by us, for his kindness, professionalism and mannar,” Al Hinai said.
“I would also like to thank all the nurses and staff that took care of my son in the five days we were there. God bless them all,” added Al Hinai.