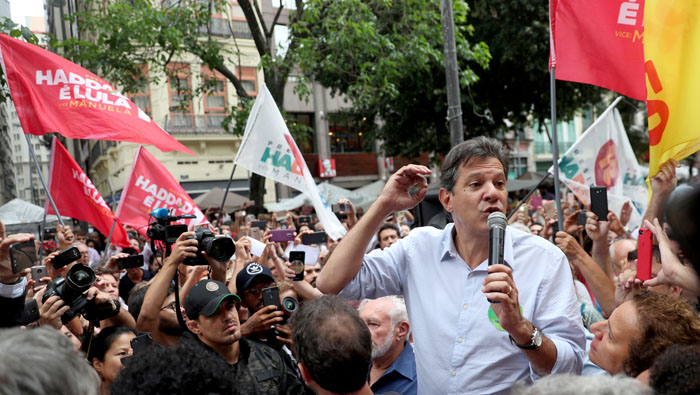 Brasilia: Facebook Inc's WhatsApp messaging service became the frontline in Brazil's bitter presidential campaign on Friday, as front-runner Jair Bolsonaro angrily denied accusations he had encouraged widespread misinformation campaigns on the platform.
On Thursday, newspaper Folha de S.Paulo had reported that supporters of the far-right candidate had funded mass messaging attacks against leftist rival Fernando Haddad.
Bolsonaro said in an online video that he had no knowledge of such activity and called on any supporters doing so to stop. Haddad and his allies have urged an investigation and threatened a flurry of legal action, as the race that lawmaker Bolsonaro is expected to win by a landslide on October 28 reaches its final stretch.
Later on Friday, Brazil's top electoral court TSE approved opening a probe into the case. The recriminations highlight the outsized political role of WhatsApp in the election in Brazil, where its more than 120 million users rival the reach of Facebook's main platform, in a country with a population of almost 210 million.
The messaging app allows groups of hundreds of users to exchange encrypted texts, photos and video out of the view of authorities or independent fact checkers, enabling the rapid spread of misinformation with no way to track its source or full reach.
Digital marketing firms had apparently taken advantage of that opacity to circulate unregistered political propaganda, according to the Folha report. WhatsApp said on Friday it was "taking immediate legal action to stop companies from sending bulk messages," including cease and desist letters to the companies in question.
The day before, WhatsApp said it had banned hundreds of thousands of accounts during the election period, with spam detection technology spotting accounts engaged in automated 'bot' behavior. Yet new questions arose on Friday about the effectiveness and consequences of that technology.
The leading presidential candidate's son, Senator-elect Flavio Bolsonaro, revealed he had been blocked from using the service, demanding an explanation from the company.
"There is no limit to the persecution!" Flavio Bolsonaro wrote on Twitter, adding that the ban had since been lifted. WhatsApp confirmed that it had blocked Flavio Bolsonaro's account for "spam behavior" in recent days, for reasons unrelated to the Folha report.
Haddad's Workers Party has filed an official complaint with electoral courts, asking them to investigate the allegations of illicit financing for misleading propaganda. It is unclear what effect, if any, the accusations will have on opinion polls.
The latest Datafolha survey, taken before the story was published, showed Bolsonaro had 59 per cent of voter support, compared to 41 per cent for Haddad.
Bolsonaro has run as an anti-establishment candidate despite representing Rio de Janeiro state as a federal congressman for nearly three decades. With a career untainted by major corruption investigations, he has rallied voters fed up with years of graft scandals and economic mismanagement while the Workers Party was in power.
The WhatsApp allegations have energized Haddad, who said his party has witnesses saying Bolsonaro asked business leaders for cash to pay for the bulk messaging, which he described as soliciting undeclared campaign contributions.
The Democratic Labor Party (PDT), which supports Haddad, filed an electoral complaint on Friday asking courts to annul the presidential election due to what it called an "abuse of economic power."