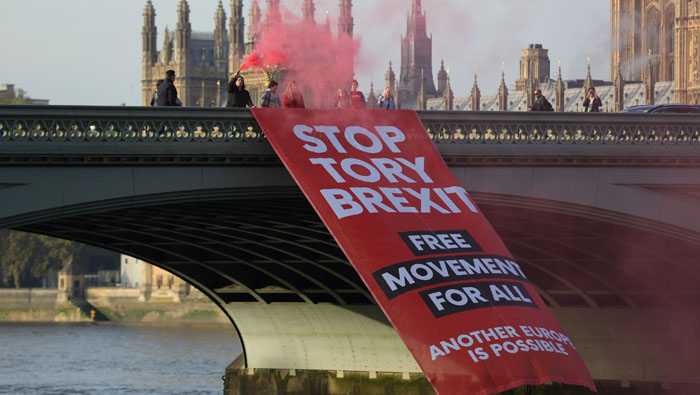 London: Tens of thousands of supporters of the European Union began marching through London on Saturday as part of what organisers say will be the largest ever demonstration to demand that the British government holds a public vote on the terms of Brexit.
The protesters waved the blue and gold flag of the EU and held up "Bollocks to Brexit" banners under sunny skies to call for another referendum on the eventual deal on how Britain will leave the world's biggest trading bloc.
The march comes as pressure builds on Prime Minister Theresa May over her negotiating strategy with just over five months until Britain is due to leave. There is, so far, no divorce deal and some rebels in May's Conservative Party have threatened to vote down a deal if she clinches one.
James McGrory, one of the organisers of the march, said the public should have the chance to change their minds because the decision will impact their lives for generations.
"People think the Brexit negotiations are a total mess, they have no faith in the government to deliver the promises that were made, partly because they cannot be delivered," he said.
Members of parliament from all the main political parties are set to join the demonstration. Organisers estimate that more than 100,000 people will take part. Crowds will gather near Hyde Park and pass Downing Street and finish outside of parliament.
The 2016 referendum saw 52 per cent vote in favour of leaving the European Union. But the past two years have been politically fraught as the government has struggled to agree on a plan and there are fears that Britain leave the bloc without a deal.
Some opinion polls have shown a slight shift in favour of remaining in the European Union, but there has yet to be a decisive change in attitudes and many in Britain say they have become increasingly bored by Brexit.
The prime minister has repeatedly ruled out holding a second referendum. The opposition Labour party said last month they open to a second referendum with the option of staying in the bloc in certain circumstances. Brexit supporters say a second referendum would trigger a major constitutional crisis.
"We had a vote, we voted to leave, the idea to have a second referendum would be incredibly damaging," said Richard Tice, Vice-Chairman of Leave Means Leave, which wants a clean break with the EU.
"People need to be under no illusions as to how people feel about what is a significant potential for a total betrayal of democracy in this country."