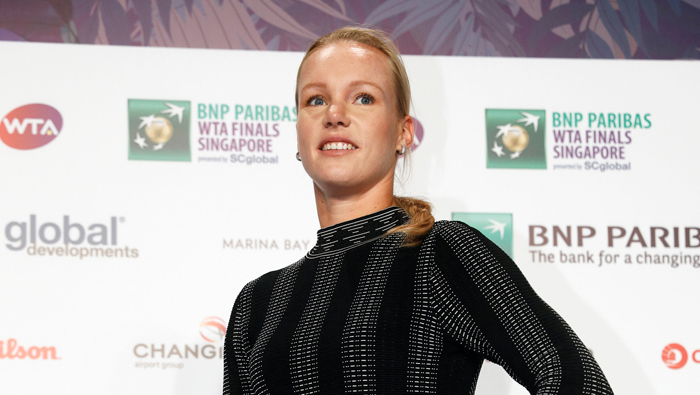 SINGAPORE: Simona Halep's loss is Kiki Bertens' gain and the Dutchwoman plans to make the most of her WTA Finals debut in Singapore next week after slipping into the eight-woman field at the last moment when the world number one withdrew through injury.
Bertens has had her best year on tour to date, winning three titles and reaching the Wimbledon quarter-finals, but an early exit in Moscow this week left her ninth in the Race to Singapore standings and heading to Southeast Asia as a first alternate.
"After my loss in Moscow I felt really disappointed not making it. Of course you're sad, but you know there is still a chance. But on the way to the airport, I got the call. I had some emotions there," Bertens told reporters on Saturday.
"I had to come anyway because I was the first alternate. But it was a better feeling on the flight sitting there knowing that I had to play a few days after, than maybe sitting here all week and not playing. So, yeah, that was a good feeling."
Bertens has been drawn in the Red Group alongside Naomi Osaka, Sloane Stephens and Angelique Kerber, who she opens her campaign against in round robin play on Monday, and hopes she can enjoy the tournament having secured a berth in the field.
"I hope it's going to be a little bit more relaxed from now on. I think there is always going to be some stress and tension. You always want to finish your season on good terms, because it's been an incredible season so far," she added.
Setting Goals
"The last few weeks were a little bit more stressful. You try not to think about it, try just to play your match and go from there, but in your head you know like how many points you need to make Singapore.
"That would be like really a good season ending. But that's how it works. I think everyone had to deal with the pressure. But in the end we're all here."
Bertens reached the final of the WTA Finals doubles event last season with Johanna Larsson but the world number 10 decided to put more emphasis on her singles career in 2018 having felt she had underachieved on her own.
"Being here last year was like - of course it was great to be here in doubles but it was also mixed feelings. I was not really feeling good on the court, so I had to use my holidays to think about what I wanted," she said.
"Now I'm here. The only goal at the beginning from this year was to enjoy my tennis more. That's what I did. And then of course during the year, there came some goals, like also with the ranking, reaching the top 10, and then Singapore.
"I have reached all my goals for this year, so I can be really proud of that and happy of that. Hopefully, we can also finish it really well here."