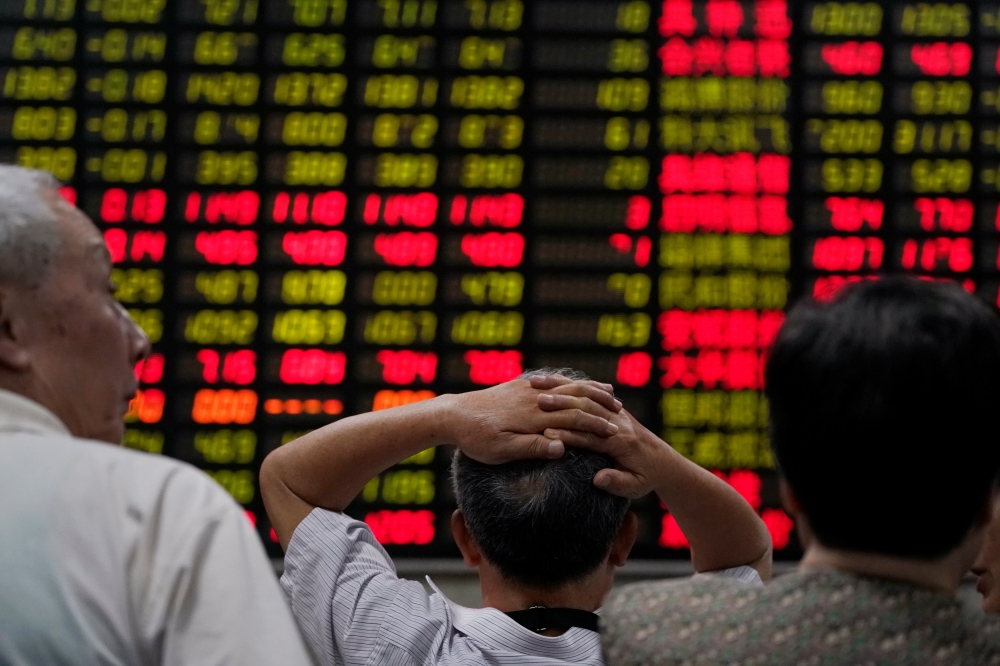 Tokyo: China's benchmark stock index skidded to four-year lows and dragged Asian equities down on Thursday, as renewed fears of a broadening economic impact from an escalating Sino-U.S. trade conflict sapped confidence.
The dollar, however, was in fine fettle, hitting a one-week high after the minutes of the Federal Reserve's latest meeting backed market expectations for borrowing costs to rise further.
While the Fed's policy outlook suggested the U.S. economy was humming along nicely, the spectre of rising dollar yields, which along with trade tensions were at the centre of last week's global equities rout, dented appetite for risk. China's stock markets were hit hard, with the nation's premier warning that the economy faces increasing downward pressure.
MSCI broadest index of Asia-Pacific shares outside Japan fell 0.5 percent.
China's benchmark Shanghai Composite Index shed as much as 2.2 percent to hit its lowest level in four years, while the blue-chip CSI 300 index dropped as much as 1.8 percent, not far from its more than two-year low marked previous day.
Analysts at Pingan Securities said in a note that lending data released on Wednesday failed to reassure investors looking for more government support amid signs of slowing growth.
"The overall falling trend of total social financing growth remains unchanged, and the loosening of the credit situation that the market has been waiting for has not yet emerged."
The rest of Asia also struggled, with Hong Kong's Hang Seng index easing 0.4 percent and Japan's Nikkei average slipping 0.7 percent.
Data out earlier in the day showed exports from the world's third-biggest economy dropped for the first time since late 2016, hit by declines in shipments to the United States and China.
The U.S. dollar index and Treasury yields rose to its highest levels in a week on Wednesday.
The dollar index, which measures its value against six major peers, last traded at 95.703, little changed on the day, after rising to a fresh one week-high earlier in the day. 10 year Treasury yield last stood at 3.210 percent, 2.8 basis points higher than the U.S. close.
The euro changed hands at $1.1496, holding steady versus the greenback, after losing 0.65 percent on Wednesday. The euro has lost just under 3 percent of its value versus the dollar over the last three weeks.
The minutes from the Fed's Sept. 25-26 meeting showed every Fed policymaker backed raising interest rates last month and also generally agreed borrowing costs were set to rise further, despite U.S. President Donald Trump's view that the tightenings have already gone too far.
Major currencies have shown limited reaction after the U.S. government late on Wednesday refrained from naming China or any other trading partner as a currency manipulator, as it leans on import tariffs to try to cut a trade deficit with China, soothing investor sentiment in Asia.
In its semi-annual currency report, the U.S. Treasury Department said a recent depreciation of China's yuan currency will likely exacerbate the U.S. trade deficit, but U.S. officials found Beijing appeared to be doing little to directly intervene in the currency's value.
The yuan was steady at 6.9390 per dollar in the offshore trade, not far off 1-1/2-year low of 6.9587 touched in August.
But some investors remain wary of a slide towards the psychologically important level of 7 to the dollar.
"The continued risk of a fresh bout of weakness (in the yuan) cannot be ignored" with U.S. Treasury yields beginning to creep higher again, Trump hinting at further tariffs on Chinese goods and the Chinese stocks hitting a multi-year lows, said Simon Derrick, chief currency strategist at BNY Mellon.
In Europe, the European Council meeting kicked off on Wednesday with a roundtable dinner, with British Prime Minister Theresa May's address ahead of it, though expectations that anything substantial will come out of it have already been fading.
"Hopes for Brexit deal has supported the pound for the past two months. So if there's no meaningful development, other than longer transition period, the pound could come under short-term selling pressure," said Tohru Sasaki, head of markets research at JPMorgan Chase Bank in Tokyo.
Oil prices fell on Wednesday, with U.S. futures settling below $70 a barrel for the first time in a month, after U.S. crude stockpiles rose 6.5 million barrels, almost triple what analysts had forecast, while exports dropped.
The West Texas Intermediate crude futures and Brent crude futures last traded at $69.79 and $80.07 a barrel, respectively.