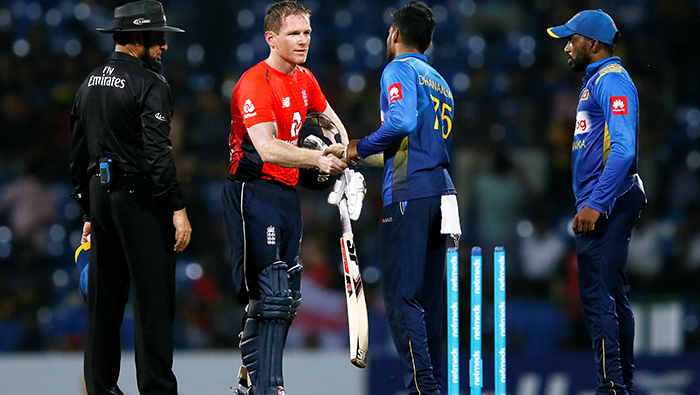 Kandy: Captain Eoin Morgan smashed his second half-century in two games and Adil Rashid took four wickets to help England crush Sri Lanka by seven wickets in the rain-marred third one-day international on Wednesday.
Chasing 151 in 21 overs after persistent rain had shortened the match, the visitors rode on Morgan's unbeaten 58, including seven fours, to reach 153-3 with 15 balls to spare.
Jason Roy (41) and Ben Stokes (35 not out) gave Morgan valuable support as England took a 2-0 lead in the five-match series after the opening game was washed out.
Earlier, Adil Rashid produced a masterful display of spin bowling to claim 4-36 in five overs as Sri Lanka squandered a good start to struggle to 150-9 in 21 overs.
The leg-spinner was assisted by Tom Curran (3-17) who came into the side in place of injured left-armer Liam Dawson and impressed with his seam bowling.
After Sri Lanka had won the toss, Niroshan Dickwella and Sadeera Samarawickrama took the attack to the bowlers as the hosts reached 50 runs in 28 balls.
Dickwella, who hit eight fours, fell for 36 looking to loft Curran out of the ground, mistiming his shot to be caught by Chris Woakes at mid-off.
Wicketkeeper Kusal Mendis departed first ball after failing to read Rashid's googly.
Skipper Dinesh Chandimal joined Samarawickrama and the pair shared a 35-run partnership before the opener became Rashid's second victim to leave Sri Lanka 94-3.
Rashid dismissed Thisara Perera for a duck with the next ball before Curran removed Dhananjaya de Silva and the hosts' early momentum faded away.
Jonny Bairstow and Joe Root fell cheaply in England's chase but Roy struck two sixes as he raced to 41 off 26 balls before Morgan and Stokes comfortably steered England to their target.
The fourth ODI will be played in Kandy on Saturday.