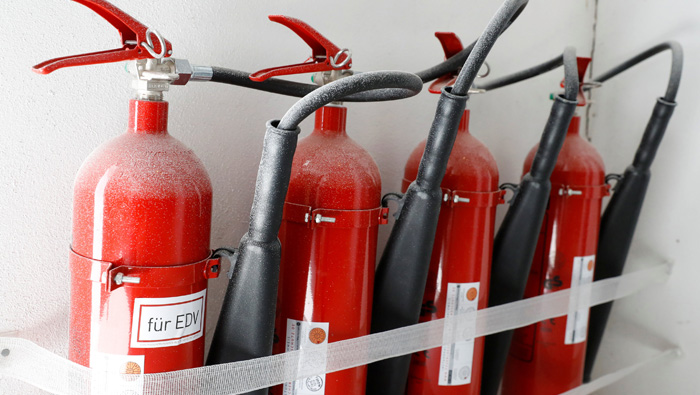 Muscat: Oman’s Public Authority for Civil Defence and Ambulance (PACDA) has recommended that all home owners and property developers install fire extinguishers and smoke alarms in all houses in the Sultanate to catch fires early and ensure there is no irreplaceable damage to life and property.
The recommendation comes in PACDA’s new emergency safety handbook, which carried detailed instructions on how to prevent and deal with fires.
“It is recommended that each house has a carbon dioxide fire extinguisher,” said a PACDA spokesman. “Please contact the authorised fire extinguisher dealers or contact PACDA for further inquiries.
In fatal fires, more people die from smoke inhalation than from burns. A smoke detector automatically emits an alarm upon detection of smoke and will thus help increase your chances of surviving a fire.”
Extinguishers are commonly of three types: water, carbon dioxide and dry chemical powder.
Water is used for combustible materials such as paper, cloth and wood, and is not to be used against oil fires, as this will cause the fires to spread. Carbon dioxide fires are best against flammable liquids and gases, as well as live electricity and other combustible materials, while dry powder extinguishers are also used for fires involving combustible metals such as sodium, potassium and magnesium.
PACDA recommends using the PASS method to operate one. This involves pulling out the safety pin as instructed on the label, aiming the nozzle at the base of fire, squeezing the lever and sweeping the fire using the extinguisher.
Smoke detectors
“Install smoke detectors on the ceiling near sleeping areas, the kitchen and other places where the fire is likely to occur,” added the spokesperson. “Please test your smoke detectors regularly based on the manufacturer’s instructions, follow the manufacturer’s instructions on cleaning the smoke detectors regularly, and ensure that smoke detectors have their batteries changed yearly or when indicated by the device, whichever is earlier.”
“Most people die from smoke inhalation in fatal fires,” he said. “Cover your nose and mouth with a wet cloth and avoid inhaling through the mouth, and get down, keep close to the ground and crawl towards the point of escape under the smoke.”
While fire extinguishers and smoke alarms are the first line of defence against fires, PACDA has said that in the case of a blaze, the authorities must be informed at the earliest, because it does not take long for a fire to spiral out of control, something that only professionals can handle.
“In the event of a fire, break the glass of the nearest manual call point to activate the fire alarm system that will sound throughout the building,” said the PACDA spokesman.
“This will alert all occupants of a fire and prompt them to evacuate the premises. To put out the fire, you may use a fire extinguisher or a hose reel. For hose reels, you will need someone to help you as they are typically best operated by two persons.”
To use a hose reel, turn on the reel valve in the direction shown on the valve, pull the hose and run it to the fire, and then turn on the water at the nozzle and direct it at the base of the fire. However, if residents and citizens in Oman do find themselves trapped in a fire, they are required to enter a safe room, preferably one with open windows, good ventilation and overlooking a road.
The door to the room must be shut, and the gap below sealed with a blanket, rug or other fabrics to prevent smoke from entering the room, after which people in the room need to go to the window and shout for help after calling PACDA. Above all, people are requested to stay calm and not jump out of the building.
According to data from the National Centre for Statistics and Information’s Statistical Yearbook for 2017, a total of 4,748 fires took place last year, up from 4,157 the previous year and 3,684 in 2015.
The most fires broke out in the North Batinah Governorate (1,301) followed by Muscat (1,296). Dakhiliyah (501), Dhofar (347), South Batinah (404), South Sharqiyah (247), North Sharqiyah (171) and Dhahirah (226) all recorded significant cases of fires.
The least number of fires broke out in the Wusta (32) and Musandam (74) Governorates. In case of emergencies, PACDA can be reached on 9999 or on 24343666.