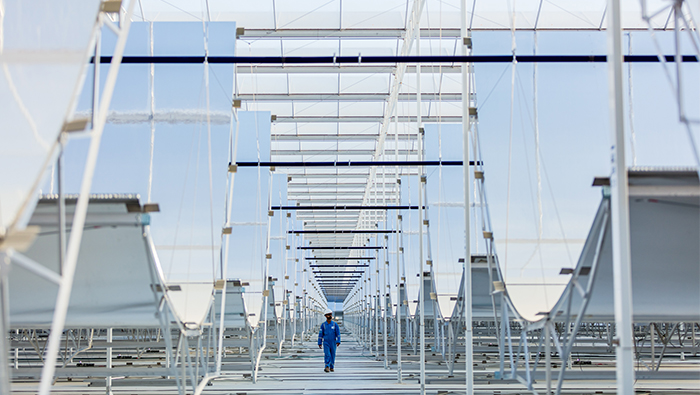 Muscat: From persons to regional enterprises, Oman is moving towards becoming a greener country.
According to Dr. Mohab Al Hinai, Project Manager of the Environmental Centre of Excellence of be’ah, “Renewables will generate no less than 10 per cent of the electricity produced in Oman by 2030. There have been a number of projects announced that aim to generate electricity from solar and wind power. Subsequently, a number of projects and initiatives have been announced to generate between 2,500 MW and 3,000MW of renewable-based power by 2025.”
Speaking about be’ah’s own role, he added, “[Our company] is currently collaborating with many partners such as the Oman Power and Water Procurement Company (OPWP), Petroleum Development Oman (PDO) and Haya Water to study the feasibility of multiple projects to produce energy from waste. Additionally, we are conducting field surveys and assessments to determine the feasibility of producing biogas from organic waste. We also have ambitious plans to divert at least 80 per cent of our waste from landfills in the next few years. In order to achieve this diversion rate, the waste will be utilised as raw material to manufacture commercially and economically viable products.”
According to PDO’s Dr. Abdullah Al Abri, ICV Technical Lead, renewable energy is more than just making electricity.
Electricity generation
“When people talk about renewables, they talk about electricity generation. But a second form is called ‘Power to X’. X here is the creation of applications of power, such as the Miraah project, which uses solar power to create steam, which we use to reduce the viscosity of oil during mining. By pushing the bar, Miraah is now the biggest project of its kind in the world,” he said.
“There is also heat generation, which we use in everything at PDO. Right now, most places use diesel or gas fire. What we’re doing is using renewable energy to keep electric heaters going, which then saves gas. A third application in Power to X is hydrogen. Currently, we crack natural gas in order to produce hydrogen, which is also used in many factories. If we could use renewable energy to get water, say from water for example, we could save a lot of gas,” he added. “So this is how I see Oman 2030. I see a big explosion in this business. This will stimulate all the supply chains, all the SME developments.”
Yosuf Al Salmi, who installs solar power generators in the northern governorates of the Sultanate, said, “We have seen an increase in the number of people who want to set up solar generators. This is because of a massive decrease in prices when it comes to parts for the solar panels.”
Al Abri added, “Solar is good for the day, but what do you do during the night? So now, we’re really putting both feet in the market and looking for partnerships with every technological provider. I’m sure that in the next two years, we’ll do something major for power storage for renewable energy.”
This does not mean that fossil fuels will disappear.
Al Hinai said, “In any case, the oil industry is not going to disappear overnight, rather, it will evolve and adapt to the changing global economic and environmental landscape.”
According to Al Abri, “We will continue to use oil, it’s just that the processes will change. We might not use oil to power equipment, but we will use oil for something else, including in the 4th industrial revolution and emerging industries.”
Al Salmi added, “Even today, we don’t stop using fossil fuels when we install solar panels because we need oil for night-time energy generation. Whatever jobs move away from energy creation through oil and gas will move to other industries, so there is no danger to the industry.”