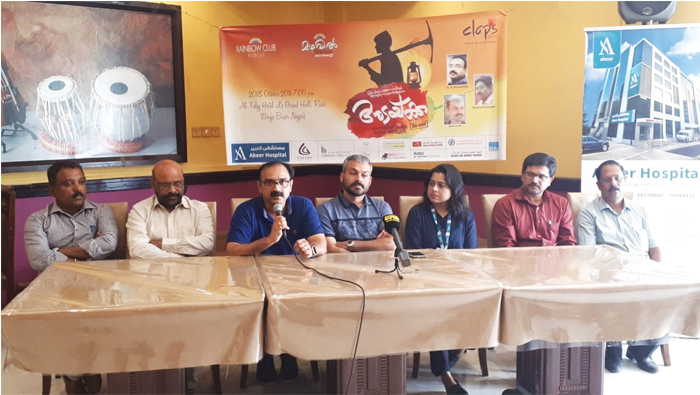 Muscat: Expats from Kerala have a reason to rejoice now. Rainbow Muscat, under the banner of Mazhavil Natyagriham, is organising a play, “Adaykka”, directed by K. V. Manjulan, based on an award-winning story of the same name written by Dr Rajgopal (Anaesthetist, Khoula Hospital, Muscat).
At a press meet yesterday at the Ananthapuri hotel, Muscat, the organisers of the play announced that the play will be staged at the Al Falaj Hotel Auditorium on October 20. Claps Events will manage the programme. Manjulan and Dr Rajgopal were present at the event. The major sponsors for the event are Abeer hospital, Cochin Gold and Diamonds and Oriental Steel LLC.
The play, “Adaykka”, is a theatre adaptation from Dr Rajgopal’s short story collection titled “Ezhu Theevandikal”. The story bagged the first prize at the Kerala University Youth Festival competition in 1989. Dr Rajgopal was also conferred the Sangeetha Nataka Academy - Best Jury Award for the script of his play “Jeevante Avashishtom” in 2014.
“Adaykka” has the honour of being directed by the award-winning Manjulan, better known for plays such as “Kelu” and “Embryo”. Manjulan is not new to Muscat. His plays “Kelu” and “Mazhapattu”, which were staged earlier in Muscat, are still fresh in the minds of drama lovers. Manjulan’s solo drama “Koonan” is inching towards its 2,000th stage and is expected to enter the Guinness Book of Records soon. A first rank holder from the School of Drama Thrissur, Kerala, Manjulan is also a post graduate in classical theatre arts from Kalady Sanskrit University.
He also boasts of several awards for his direction, including the revered Sangeetha Nataka Academy for his plays “Kelu” and “Embryo”. Having made his mark in the film field with meaty roles in Malayalam and Hindi movies, Manjulan is best known for his talent in theatre. He has also been conferred with the most sought-after fellowship from the cultural department of the government of India. Enthusiasts, who closely follow theatre, will vouch for Manjulan’s plays and know they are a class apart from the rest. He always strives to deliver the best to his audience.
The theatre script for “Adaykka” is developed by Rohith Kozhoor, also a well-known scriptwriter from Kerala. Around 30 artistes were selected from Muscat to perform in this play. The selection was conducted earlier through a systematic audition process in Muscat.
In brief, the play “Adaykka” describes the detachment of humans from Mother Nature by the influence of technology and the thirst to return to nature. True to the trademark Manjulan style of theatre, the play is to be enacted in a unique way, creating an additional stage using realistic properties.
The audience will have the best of experience and critics opined that this play is not to be missed. Actors participating in this drama are all from Muscat. Few are well-known faces in the theatre circles for their power-packed performances in various plays over the years.
Manjulan has lined up the best for “Adaykka” and leaves no stone unturned to bring out the best from his actors that promises a memorable experience for the audience. He has packed a few surprises in the play to enthuse the spectators. The rehearsal camp also became a makeshift acting workshop for budding actors.
Seasoned actors mentioned that the rehearsal camp is exceptional and valuable inputs from Manjulan are helping them polish their talent.
“Rainbow Muscat” was formed four years ago by a group of talented artistes to nourish talents and provide an opportunity for the expat community in Oman. It was formed to get the new generation to touch base with the rich culture of Kerala and its unique art forms.
“Adaykka” will be the biggest and most challenging event till date for the Rainbow Muscat team. With so much of preparation and resolve amongst the team, “Adaykka” promises to be a must-watch for theatre enthusiasts.
Spokespersons from Rainbow Muscat said that this performance will be dedicated to the late Girija Baqer, who was well known to promote talent and art in Muscat.

The play coincides with her first death anniversary. The entry is free for all and is expected to start at 6pm.

The play is supported by leading business houses in Oman. Abeer Hospital, Cochin Gold and Diamonds and Oriental Steel LLC are the lead sponsors. Many other business houses have contributed in their own way to support this theatrical play. Organisers from Rainbow Muscat expressed their wholehearted gratitude to all sponsors, supporters and well-wishers on this occasion.