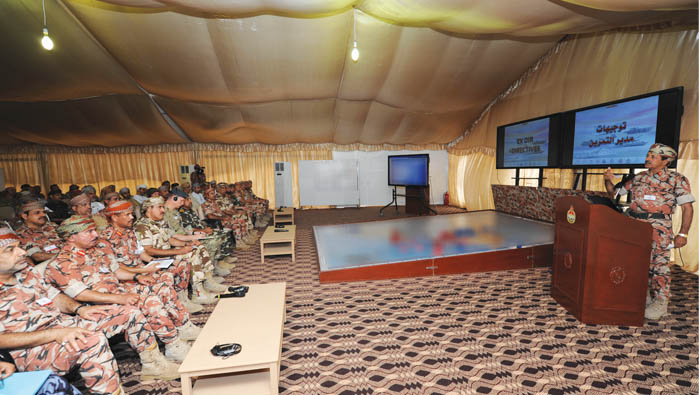 Muscat: The Omani-British joint military exercise “Swift Sword 3” was launched yesterdday after the military, security and civil organisations had completed (Al Shomoukh 2) military exercise, which was concluded with a number of strikes against the hypothetical enemy troops.
Lt.Gen. Ahmed bin Harith Al Nabhani, Chief of Staff of the Sultan’s Armed Forces (SAF), Exercise Director, hailed the achievements made at (Al Shomoukh 2 exercise). He said the training objectives that were achieved should be a source of pride for Oman and its loyal people.
The SAF Chief of Staff (Exercise Director) thanked all military, security and civil organisations taking part in the exercise and hoped that this level of harmony should be maintained during the joint military exercise (Swift Sword 3) to achieve the national objective; serving the country and His Majesty the Sultan, the Supreme Commander of the Armed Forces.
The SAF Chief of Staff (Exercise Director) thanked the Royal British Forces taking part in the (Swift Sword 3) for their preparations to commence the exercise.
He hailed their level of operations and the efforts made by the British forces commands.
He added that the exercise provides a good opportunity for sharing experiences in the planning and training fields, as well as activities of implementation.