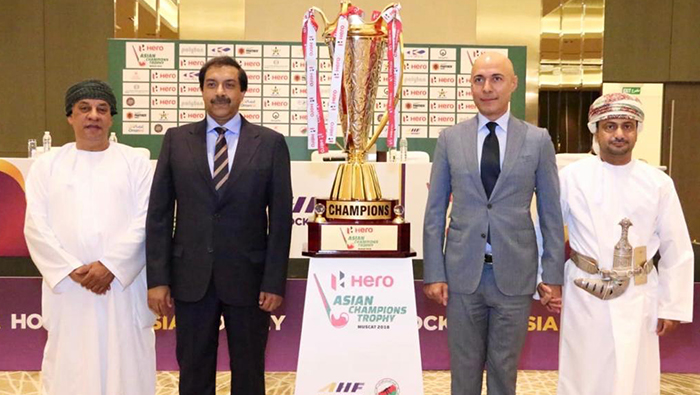 Muscat: Pakistan's ambassador to Oman Ali Javed joined Captain Talib Khamis Al Wahaibi, Chairman of Oman Hockey Association (OHA), Dato Tayyab Ikram, Chief Executive Asian Hockey Federation, and Dr. Khamis Al Rahbi, Secretary General OHA, at the unveiling ceremony of the convened Asian Champions Trophy organised by OHA in Muscat on Tuesday.
Expressing his delight for hosting the international competition of the highest stature in the world of hockey and praising the response from hockey fans in Oman, the Chairman of OHA appreciated support from the Pakistani community, adding that the stage was set for a thrilling international competition among six top Asian hockey nations.
The Ambassador thanked IHF and OHA for making excellent arrangements for hosting the event in the Sultanate and praised the up-gradation of the seating capacity of the host venue at Sultan Qaboos Sports Complex.
Held annually since 2001, Qatar was the first GCC nation to host the Champions Trophy in 2012. Oman, where hockey is the oldest sport, will host and play in the event featuring arch rivals and most successful outfits of the Champions Trophy with two victories each — Pakistan and India — and nations excelling at hokey such as Japan, Korea and Malaysia.
The Embassy is unprecedentedly gifting 200 tickets, 50 tickets for each match the "Green Machine” Pakistan shall play, on a first-come first-serve basis to the Pakistani community. These tickets can be claimed at (+968) 71193072.