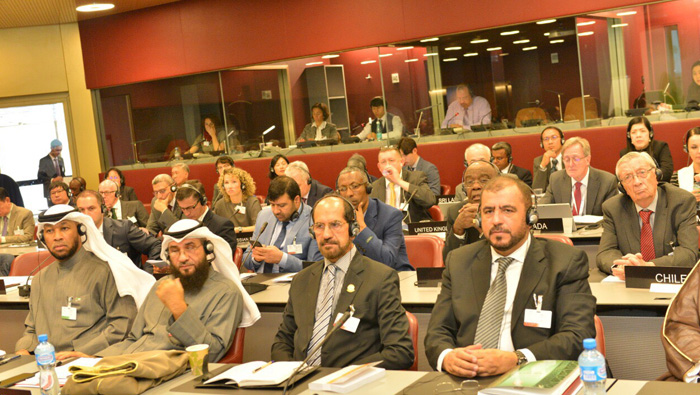 Muscat: The delegation representing the Sultanate yesterday participated in the meetings of the 139th Inter-Parliamentary Union currently being held in Geneva.
Dr. Khalid bin Salem Al Saidi, Secretary General of the State Council and Sheikh Ali bin Nasser Al Mahrouqi, Secretary General of Majlis Al Shura participated in the meeting of the General Assembly of national parliaments of the 139th session of the Inter-Parliamentary Union (IPU).
The meeting included discussions on public and private meetings and their impact on the decision-making process.
During the discussion, the State Council’s Secretary-General addressed the role of the General Secretariats of national parliaments in providing the technical possibilities for the use of technology in the council chamber and in communicating with members and highlighted the positive impact of the use of technology on the functioning of parliamentary councils.
Rayya Salim Said Al Manthari, State Council member and member of the Executive Committee of the International Federation of Young Parliamentarians Forum of IPU representing the Arab Group, participated in the meeting which discussed a number of items including country updates on youth participation, where the forum discussed recent developments related to youth participation in several countries, progress to date, current challenges, conclusions and recommendations.
The Forum discussed its contribution to the work of the 139th General Assembly, and discussed its work plan and activities for the Year (2017-2018), as well as the discussion of the preparatory work of the General Assembly of the 14 April 2018.
Rayya participated in the meeting of the Board of Directors of the Youth Parliamentarians Forum, which discussed a number of youth issues related to empowering them in parliamentary work in various fields of development.