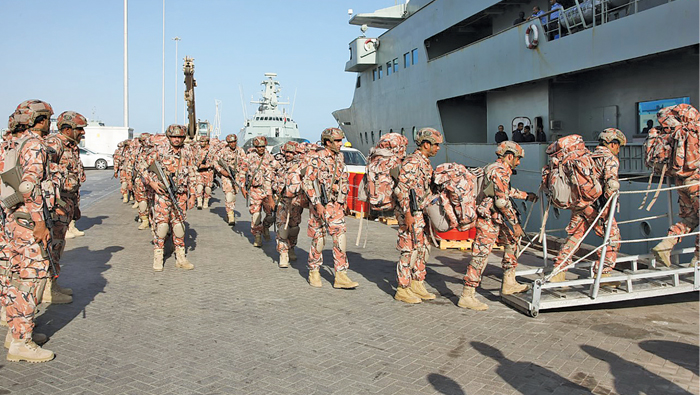 Muscat: The Sultan’s Armed Forces (SAF) and other military and security services taking part in Al Shomoukh 2 and Swift Sword 3 (SS3) military exercises completed the main stage of Al Shomoukh 2 at the joint operations theatre.
The land force completed their procedures and moved their combat formations and units to the targeted areas for the land operations to engage the hypothetical enemies by moving the weapons, and as well as other combat and support units.
Simultaneously, the air force provided the air cover and direct support to the land and marine forces.
In the meantime, the air force transported a number of weapons and equipment using helicopters to provide the much-needed support to the troops for the land operations and to enable them to carry out their combat duties in the front lines according to the exercise plan.
On its part, the marine force transported part of the land force onboard the navy vessels an provided the necessary support for the combat formations and units.
It also sought to serve the plan of the joint commander with relation to distracting the hypothetical enemy. Such support contributes to the success of the land force during the operations.
To ensure success of the military operations, the Police Force taking part in the exercise played a role in maintaining order, imposing curfew and controlling roads and public properties. It also played a role in combing coasts and operating patrols to serve the mission of the joint commander in the operations theatre.