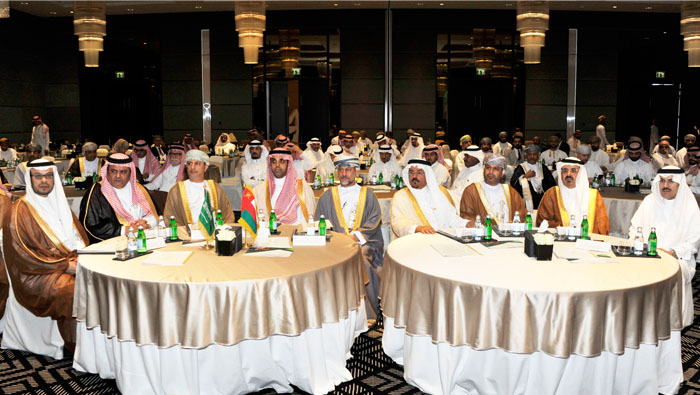 Muscat: The Oman-Saudi Business Forum, organised by the State General Reserve Fund, reviewed the investment opportunities in the Sultanate in transport, ports, tourism, fish farming, mining, oil and gas sectors. It also discussed the prospects of increasing trade cooperation between the Sultanate and Saudi Arabia (KSA) yesterday.
The opening ceremony of the forum was held under the patronage of Sultan bin Salim Al Habsi, Deputy Chairman of the Board of Governors of the Central Bank of Oman. Al Habsi said that the relations between the Sultanate and Saudi Arabia are strong and solid, as the KSA is one of the main partners with the Sultanate.
He pointed out that the trade between the two countries reached $ 2.2 billion in 2017, reflecting the depth of the existing partnership and its future prospects.
He added in his speech that the Sultanate is considered as one of the most promising markets in the region as it has many elements that qualify it to occupy a prominent position among the advanced economies in the region and the world due to its geographical location and the completion of infrastructure, such as ports, airports and economic zones. He said that the Sultanate’s government offers many incentives and facilities to encourage joint investments and attract more foreign investments.
He explained that the Sultanate has witnessed a remarkable inflow of foreign investments in recent years. The total foreign direct investments in the Sultanate amounted to OMR9.339 billion at the end of 2017 compared to OMR8.069 billion in 2016.
On his turn, Eng. Ibrahim bin Abdul Rahman Al Omar, Governor of the KSA General Investment Authority said that there are opportunities to promote cooperation between the two countries in light of the great developmental movement witnessed by the Sultanate through the economic policies to stimulate and encourage the foreign investments and provide the necessary facilities for the establishment of investment projects.
He explained that this forum is a continuation of the meetings held between the two sides during the past periods to introduce the Saudi private sector to the most important investment and commercial opportunities in the Sultanate and discuss means of facilitating the entry of Saudi companies to the Sultanate, which would increase the volume of trade exchange between the two countries.
For his part, Abdul Salam bin Mohammed al-Morshedi, CEO of the State General Reserve Fund said that the forum focused on investment in logistics, industry, mining and food industries. He expressed the hope that the opening of the direct land route between the Sultanate and the KSA, which is expected to open by the end of this year or early next year, will increase trade exchange between the two countries.
Eid bin Mohammed al-Thaqafi, KSA Accredited Ambassador to the Sultanate said that the land road which connects the Sultanate with the KSA is about to be completed. He noted that some road facilities at the Saudi part of the road have delayed the opening of the 570 km road which is located at a tough geographical area ‘The Empty Quarter’. He affirmed that the Omani side has completed its part of the road.
In statements to reporters, he added that the direct road will reduce the cost of import and export activities and will enhance the reciprocal trade and investment.
Dr. Ayedh Al-Utaibi, Deputy Governor of the KSA Public Authority for Investment said that the Sultanate of Oman and the Kingdom of Saudi Arabia have common aims with regard to investment in energy, tourism, mining, fisheries and logistics. They are also making endeavors to benefit from their strategic location.
He reviewed some joint ventures between the two sides, namely Salalah Independent Power Plant “Salalah II”, which is a consortium of Mitsui of Japan, ACWA Power of Saudi Arabia and Dhofar International Development and Investment Holding Company. The list of joint ventures also includes the Salalah Independent Water Desalination Plan, and Khazaen Economic City, a joint venture of Oman Investment Corporation (OIC) and Saudi engineering contractor Mohammed Ali Al Swailem Group (MASCO), the usufruct holder for the development of the city.
During the forum, the Omani side made a presentation on the State General Reserve Fund and the available investment opportunities at the Sultanate’s main ports such as Salalah, Duqm and Sohar, the logistic services in the Sultanate, the land transport operations and the train scheme. It also included a presentation by Omran, Asaas (Muscat National Development and Investment S.A.O.C), Minerals Development Oman SAOC (MDO), Oman Oil Company and Oman Investment Fund which presented its investments in Yiti, Yankit and fish farming project.
The KSA side made presentations on the available investment opportunities at the Kingdom of Saudi Arabia Vision 2030 and the improvements made in the investment environment and legislations.
The forum, which was held at Kempinski hotel in Al Mouj, included B2B meeting between Omani and Saudi businessmen.
The Saudi trade delegation, which comprises 65 officials at the public and private organizations will visit the Special Economic Zone Authority in Duqm and Duqm Port tomorrow Monday to review the underway projects and the incentives provided to investors in Duqm.