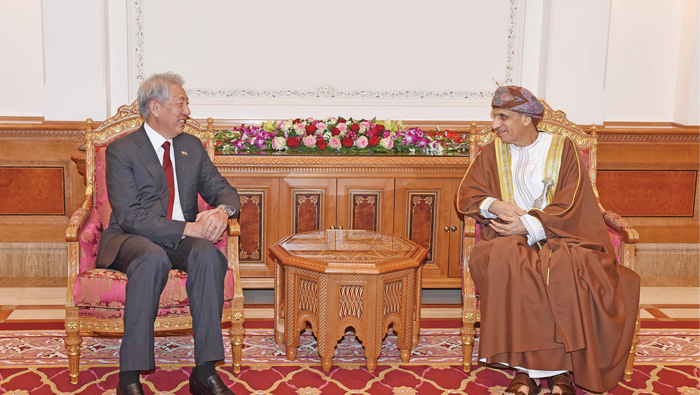 Muscat: His Highness Sayyid Fahd bin Mahmoud Al Said, Deputy Prime Minister for the Council of Ministers yesterday received Teo Chee Hean, Deputy Prime Minister, Coordinating Minister for National Security of Singapore.
The guest conveyed greetings of the President of Singapore and the Prime Minister along with best wishes of permanent success to His Majesty and his government, and the Omani people further progress and growth.
Sayyid Fahd welcomed the guest and his accompanying delegation. He hailed the growing relations between the two countries and their remarkable progress that depicts the two countries’ keenness to work for the interest of people of both countries.
The meeting reviewed aspects of the existing cooperation in several economic, trade and industrial fields, activating the agreements signed between the two sides, encouraging the private sector for joint investment and supporting fields of training and sharing expertise.
The meeting also reviewed current situations at the regional and international arenas. The guest expressed his delight and that of his accompanying delegation over this visit during which they viewed development achievements that reflected fruits of the Omani renaissance being witnessed by the country. He commended the balanced policy being pursued by the Sultanate, as well as its constant efforts to enhance security and stability in the region and the world, which gained the Sultanate respect and appreciation of all.
Sayyid Fahd asked the Singaporean guest to convey greetings of His Majesty the Sultan along with his best wishes of continuous success to the President of Singapore and the Prime Minister, and the friendly people of Singapore further welfare and prosperity.
The meeting was attended by Sayyid Badr bin Hamad bin Hamoud Al Busaidi, Secretary General of the Foreign Ministry, Sheikh Al Fadhl bin Mohammed Al Harthy, Secretary General of the Council of Ministers and Teng Theng Dar, Ambassador of Singapore.