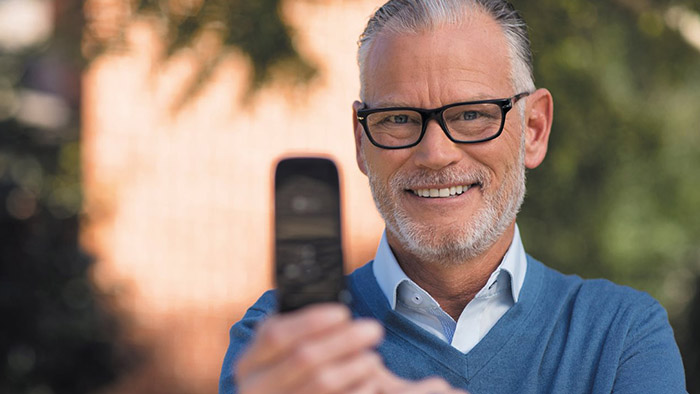 The good old-fashioned flip phone is enjoying a quiet resurgence. While they’re not exactly poised to overtake the popularity of the iPhone, these venerable devices retain a timeless appeal for those who prefer the simple convenience of using a cellphone primarily for making and receiving calls, and with older users who find smartphones unnecessarily complex for their needs.
In fact, in a “Back to the Future” twist, most of the major smartphone makers are now working on foldable devices as the next big thing in cellphone design evolution. Having seemingly reached the limits when it comes to expanding the traditional rectangular smartphone handset, a device using two or more bendable panels to form a large touchscreen when unfolded is reportedly on the drawing boards of several tech giants, and could be on the market as soon as next year.
A practical choice
While fancy, foldable smartphones may be the future, the rugged and classic 12-key flip phone soldiers on in the present, gaining new fans for more than just its compact clamshell design. After more than a decade of smartphones integrating themselves into every aspect of our daily lives, many users are making a conscious decision to dial back their screen time and let their cellphone be what it was meant to be in the first place: A simple phone.
An easy way to stay connected
As an added benefit, most flip phones today offer important features that make them surprisingly versatile. Some models can connect to the internet, though usually with limited functionality. Most include photo and video capabilities. The flip phone’s tactile keys make it easy to find the right buttons when dialing. Many include an emergency alert button, an added safety feature which allows a user to connect with emergency contacts at the push of a single button. Flip phones even work with Bluetooth functionality, so calls can be made hands-free.
Fewer frills, fewer worries
A flip phone won’t fit the bill for everyone, especially if you’re a fan of using your phone for things like streaming movies, playing games or posting to social media. Photo resolution is less sharp on flip phone cameras than on most smartphones, and while you can send text messages, the typing process can be slow and cumbersome. But viewed through another lens, many of these perceived shortcomings are precisely the charm for those who no longer feel the need to be plugged into their phone 24 hours a day, or have limited mobility or technical savvy.
Add in the fact that flip phones are a great choice for anyone who likes having extra money in their pocket, and you can understand why they remain a popular and viable choice, even in today’s smartphone-dominated wireless world.