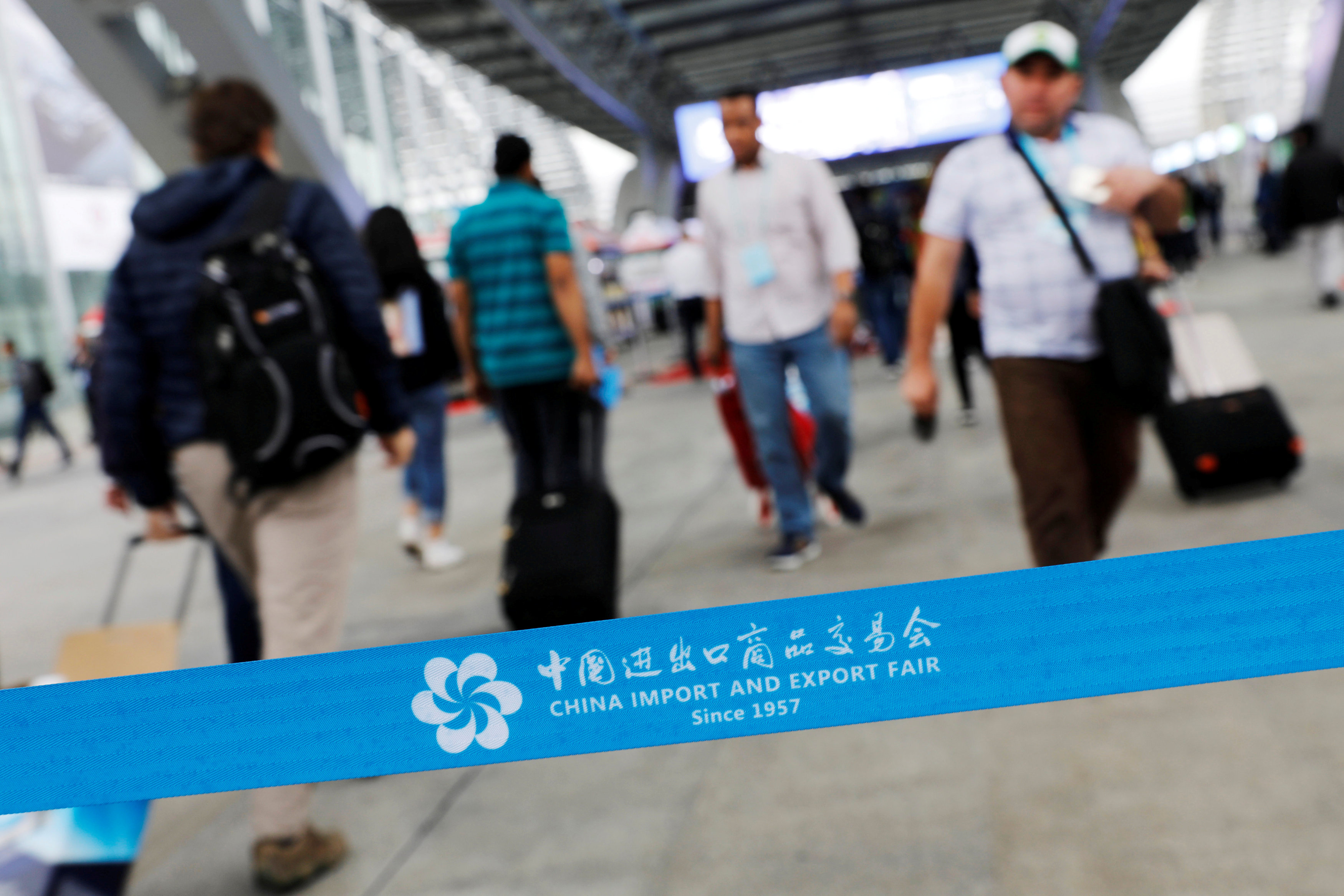 Beijing: Amid gathering gloom over the state of the Chinese economy, exporters of motorcycles, tractors, photocopiers and Christmas tree lighting will join thousands of other companies peddling their wares at China's largest trade fair Monday.
Many of those exporters will have something in common — uncertainty over future US orders as a trade war with the United States rages. The turmoil has added to concerns over the health of the Chinese economy, already under pressure from a cooling property market, a crackdown on corporate debt and risky lending practices, and a nationwide anti-pollution campaign.
The United States over the summer levied tariffs of up to 25 per cent on $250 billion of Chinese goods as punishment for what it says are unfair trade practices by China. The latest tariff salvo represented half of the $500 billion of products that the United States bought from China last year.
The rapid escalation of the trade dispute has taken many Chinese exporters by surprise. At the spring session of the twice-a-year Canton Fair in Guangzhou, only a quarter of the exporters whom Reuters spoke to said they expected a full-blown trade war.
As exporters gather at the autumn session of the three-week gathering that starts Monday, a far more sombre outlook is expected to pervade the tens of thousands of exhibition booths at the fair.
US President Donald Trump has repeatedly threatened to slap tariffs on more Chinese imports in an intensifying trade war that has led many forecasters, including the International Monetary Fund, to cut their global economic projections for 2018 and 2019.
Beijing has been urging Chinese exporters to diversify their overseas destinations and rely less on the United States — China's biggest trading partner — or turn their focus to domestic customers instead.
"Our existing US orders are relatively stable, but our US clients are not increasing their orders," said an official at a Guangzhou-based battery maker, one of many facing higher US tariffs on Chinese batteries.
"We're keeping prices stable and swallowing the tariffs ourselves," the official said.
As export-reliant cities and provinces like Guangdong show the strain, policymakers are increasingly rolling out measures to help businesses weather the trade storm.
The central bank has cut the amount of cash that commercial banks need to set aside as reserves four times this year to spur lending to small businesses. The finance ministry has reduced taxes and increased tax rebates to help lower the overheads of businesses. Billion-dollar infrastructure projects have been put on the fast track to stimulate growth.
The authorities, while saying they will not resort to competitive devaluation of China's currency to boost exports, have allowed the yuan to fall about 6 percent against the dollar this year.
Overall Chinese exports have been mostly resilient, with data Friday showing that September shipments soared 14.5 per cent year-on-year, far exceeding expectations for an 8.9 per cent uptick.
Slowing economy
The trade war with the United States is complicating an already weakening picture of growth in China this year. Beijing has set a GDP growth target of around 6.5 per cent for 2018. The economy expanded 6.9 per cent last year.
Growth has been slowing as China sheds excess production capacity and shuts polluting factories, with fixed asset investment slumping this year and monthly industrial output growth stuck in a relatively low range of 6-7 per cent.
Meanwhile, curbs and restrictions put in place to fend off property speculators have resulted in a slowdown in the residential real estate market, hitting construction and other related sectors.
The impact of a multi-year crackdown on corporate debt levels and risky lending practices has also become more apparent. Private firms are warning about tighter financing as their access to shadow financing — a cheaper source of funds than bank loans — shrinks.
Annual growth in outstanding total social financing, a broad gauge of credit that includes off-balance sheet financing, slowed to 10.1 per cent in August, the lowest on record.
As businesses struggle or even go belly-up, domestic consumption, a driver of the economy, has started to moderate.
Monthly growth in retail sales, one gauge of China's consumption, dipped below 10 per cent in April where they have remained since. The last time retail sales grew less than 10 per cent was over a decade ago.
Automobile sales fell for the third straight month in September, down 11.6 per cent from a year earlier, as worries about the economy prompted consumers to tighten their purse-strings and forego big-ticket purchases.
Wait-and-see
The state-controlled media has so far played up China's capability to tackle both internal and external challenges, including the trade war, saying there are ample policy tools available to keep growth on an even footing.
"The impact of the trade war is not too obvious yet because the US tariffs have not filtered down to some sectors yet," said Joe Chung, owner of a ceramic tile manufacturer in Guangdong.
"The worry is not just about the United States. With exports to the US slowing, there will be increased competition for other overseas markets," Chung said, predicting tough times over the next two years.
Ceramic floor materials are on the US tariff hit-list.
Chinese exporters of goods not yet on any US tariff retaliation list vary, including products like toys, sewing machines and wigs.
China's foreign trade growth may slow in the fourth quarter, the country's customs agency said on Friday.