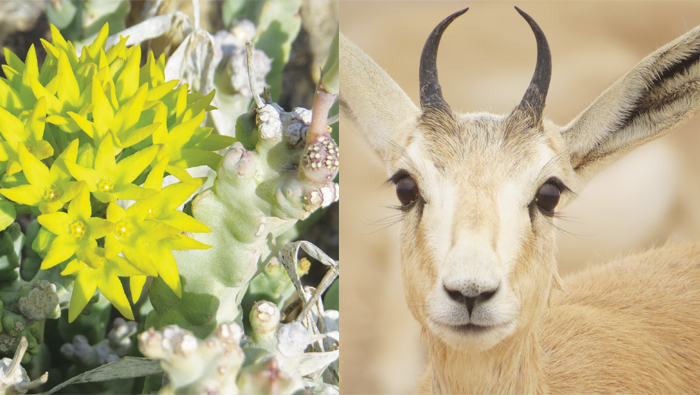 Haima: Located about 100 km east of the Wilayat of Haima, the Wildlife Reserve is one of the tourist and environmental landmarks in Wadi Gaaloni in the Governorate of Al Wusta.
The reserve was established by a Royal Decree No. (4/94) and amended by a Royal Decree No. (11/2007) over an area of 2,824 square kilometres. Formerly known as the Arabian Oryx Reserve, it was later renamed Wildlife Reserve. It is affiliated to the Office for Conservation of the Environment at the Diwan of Royal Court.
The reserve contains varieties of geological life and landscapes of unique scientific and aesthetic value.
It is the first site in the region to be recognised by the United Nations Educational, Scientific and Cultural Organization (UNESCO).
The open “Al Jada” plain in the reserve is home to many grass animals, such as the Arabian Oryx, Arabian Ghazal, and Bunnies. To the east of the “Al Jada” plain is the “Al Haqf” cliff, which provides water and shelter for many predators in the reserve, such as the Arabian Wolf, Red Fox, Lynx, Sand Fox, and striped hyena. The reserve is also an important habitat for the Arab fowl.
Some statistics indicate that there are about 21 species of reptiles in the reserve, including the labyrinthine, the Laurel, and several types of snakes, such as the coupling snake and the coupler.
Mammals
The Wildlife Reserve includes many types of mammals, such as rodents, rats, mice, and Gerbillus. These animals eat their food, which consists of cereals during the night. Also, there are scorpions, spiders, beetles, which increase in number after rainfall in the protected area.
The reserve is very rich in different species of birds because it is located on the main migration routes of birds. There are 30 species of birds that are found throughout the year in the reserve, including the sparrow, and grouse.
The latest field studies indicate that there are 189 species of wild plants in the reserve, of which 12 species are endemic. Vegetation is of great importance to wildlife. It provides food, safe haven and water source for other organisms living in the reserve through dew drops that condense on the leaves of some plants during the fog.
Most of the plants in the reserve, which are good pasture for sheep and camels, are used by local residents for shade and as a source of herbal medicine. Some leaves are used for textile industries.
Herbs are the preferred food of the Oryx. Fog has a significant effect in helping these herbs grow again after grazing and retain their greenery for a long time after the rainy season.
Fog also helps to multiply plants that will keep the lives of many animals that feed on grass, which in turn provides food for carnivores.