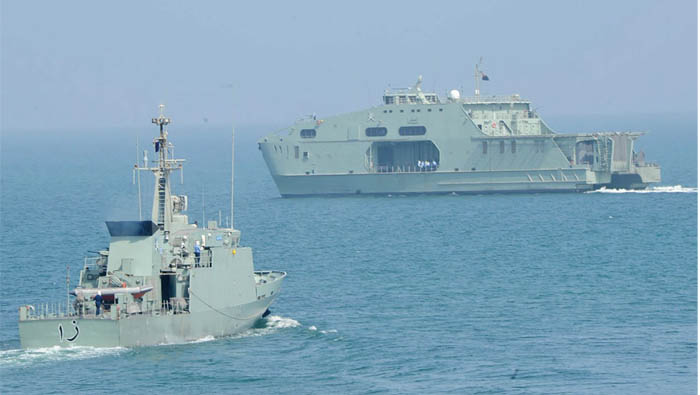 Muscat: Maj. Gen. Mattar bin Salim Al Balushi, Commander of the Royal Army of Oman (RAO), Commander of the Joint Forces, accompanied by senior officers, visited the Air Command and Naval Command of Al Shomoukh 2 and Swift Sword 3 exercises on Wednesday.
The visit came to review their readiness to conduct the next stages of the exercises and to follow the progress of operations at the air and sea operation theatres.
The RAO Commander, Commander of the Joint Forces and senior officers were briefed on the roles and responsibilities of both commands and the military measures that will be taken to address the hypothetical difficulties.
He was also briefed on the size and distribution of air and sea weapons and equipment. Maj. Gen Al Balushi praised the efforts exerted by the air and naval commands to achieve the prospective objectives of the exercise as per the plans developed according to events of the exercise.
Marine Forces Fleet
The Marine Forces Fleet carried out several tasks and duties at the maritime operations theatre, in coordination with the joint command for (Al Shomoukh 2) and (Swift Sword 3) military exercises.
The assignments were meant to ensure readiness of the fleet’s vessels to carry out the subsequent stages of the joint operations alongside with land and air troops to achieve the national goals of the complementary national exercise and the joint military exercises with the British forces.