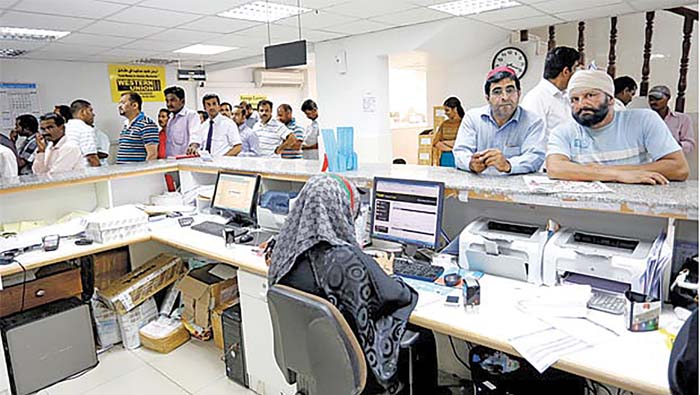 Muscat: The value of Indian and Pakistani currencies dropped further against the Omani rial on Wednesday.
The continued fall in the currencies has led to a marginal rise in remittances from Oman to both the south Asian countries. A single Omani rial would fetch you INR193.15 (Indian) on Wednesday. Subsequently, the Indian currency has fallen to INR74.44 against the dollar.
Meanwhile, Pakistani rupee (PKR) has also fallen drastically against the Omani rial recording an all-time low. The value of a single Omani rial increased to a record PKR336.
However, the currency had gained strength after Imran Khan’s Pakistan Tehreek-e-Insaf became the single largest party in the general elections. It began appreciating from the low of PKR333 against the rial. Moreover, it had been trading around PKR322 a few weeks ago.
On the other hand, the Indian rupee continued it’s free fall due to various domestic and international reasons.
“The Indian rupee received a major hit this year due to multiple domestic and international factors like rising global crude oil prices, trade war, debt outflows from India, US federal rate hikes etc, making the currency tumble further at OMR/INR 193.15 as on October 9. Also, USD/INR is being dealt all time low at 74.44 level and it has seen a 16 per cent fall this year,” Boban MP, CEO Oman UAE Exchange said.
However, exchange houses agreed that there had been a marginal increase in the remittances from Oman to India. “On a positive note, the depreciation has spiked the remittances to India, with the Indian diaspora cashing in on the favourable exchange rate. We expect the trend to continue in the coming days and expect to see the remittances further increase,” Boban added.
‘IMF loan talks sinking PKR’
Observers said that the Pakistani rupee has been falling due to Pakistan getting into discussions with the International Monetary Fund (IMF) over a possible loan. This is after a small period when the Pakistani rupee rose in value.
“The government is initiating discussions with IMF that is leading to jitteriness in the market and has led to a drop in the value of the PKR. Therefore, volatility is expected to be in the market for the next couple of days.
“If Pakistan gets into the International Monetary Fund programme again, then we might face a little depreciation in the current value,” Syed Faraz Ahmed, General Manager (GM) at Oman United Exchange said. Remittances to Pakistani have also seen a slight increase. “Typically, when the value of the PKR falls against the OMR, there is a marginal increase in remittances from the Sultanate to Pakistan. Expatriates living in the country tend to take advantage of such situations and send relatively small amounts to bank accounts back home,” the GM of the exchange house revealed.
“When there is a dip in any of the remitting currencies, there is always an expectation that people will remit more. For now, we can only predict that our customers will be sending more money but we can’t be sure as it has been just a day for the currency to face an all-time low,” Ahmed remarked.