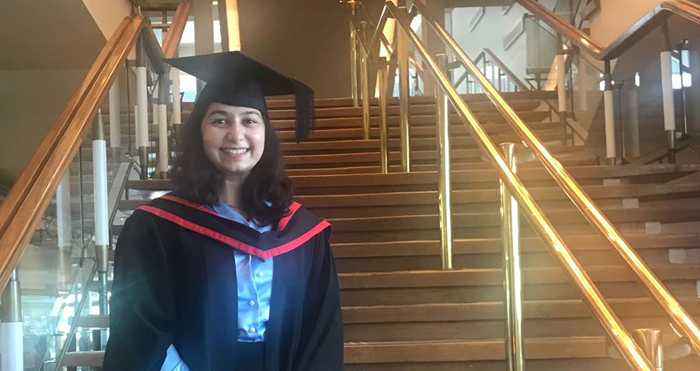 An Omani national residing in the UK has earned an MBA degree from the prestigious London Business School, while pursuing her career at the same time.
Farah Iqbal Harris, who is of Indian origin but gained Omani nationality in 2008, currently works for prestigious consulting firm Accenture, and her father, Iqbal Bondre, says the reason she’s achieved this important milestone is because of the lessons of hard work, perseverance and dedication that she has followed throughout her life.
Speaking exclusively to Times of Oman, Iqbal said his daughter never forgot the values with which she was brought up.
“Whenever she was growing up, if she wanted to pursue something, she would always put her mind to it and get it done,” he said. “She was always very focused and she never let any distractions come in the way of whatever she needed to do.
Her friends would often ask her to come with them to go out in the evenings, but she knew what was important, and whenever she needed to study, she would make sure that came first and would be her priority.
“After she finished schooling from Indian School Muscat, she graduated from Manipal Institute of Technology and then she was offered a job by Infosys in India,” added Iqbal. “She worked with them in India and the US, but then she wanted to come home and spend time with us for a while, so she came back here with Bank Muscat. We were blessed that His Majesty gave us Omani nationality so we called her back here.”
Soon after her marriage, Farah moved to London with her husband and landed a job in the UK.
“We were lucky that he was also from Ratnagiri, which is our place in India,” said Iqbal, a former government employee. “He is in London now and he is a British national.
She went to the UK and while working, she pursued her executive MBA. The company, Accenture, they really value education so she was given a couple of days off in a week so she could study. That is how she managed to do it.
“In our home, the environment is education-oriented,” he added. “I think any parent will want to do the best for their children, but more importantly, my son-in-law was encouraging her and I must give credit to him.
Being in London to manage work and studies at the same time and manage it well needs cooperation and encouragement and motivation from everyone all around you.”
Iqbal also said that although the modern world was continuously changing, there was nothing more important than a good education.
“You pick up things from your parents, because they are the finest institutions,” he said.
“The most important thing in life is education. Nothing is more important than a good character and good education,” he added.