From breaking news to exciting events, Oman saw it all in 2018 - Part II 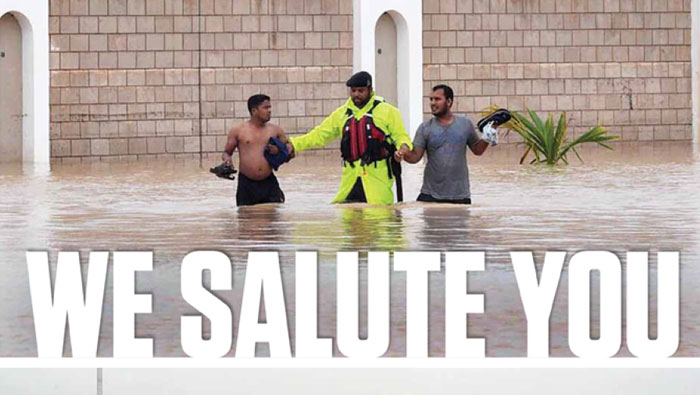 MUSCAT: As we bid adieu to 2018 and welcome 2019, Times of Oman brings you part two of the perfect round-up of some of this year’s most exciting events and news.

May
(May 8)
Two young expats dead, one fighting for life after road crash in Oman
Two young Indian expats died and a third was critically injured after their car smashed into a street lamp in Muscat. The accident occurred in the early hours of Monday, May 7, 2018, near the Muttrah flyover.
Darwin Selvaraj, Prince Edward and Percy Coelho, all in their early 20s, were driving home from an event when their vehicle collided with an iron lamppost at 3.14am. Darwin — who is the son of an administrative member of staff at Indian School Muscat — and Prince, both died on the spot, while Percy was transferred to Khoula Hospital.

(May 27)
Mekunu: We salute the heroes who ran towards the storm
Cyclone Mekunu made landfall as a Category 2 storm on the coast of Dhofar early on Saturday, May 26, 2018, bringing with it heavy rains and strong winds, with wind speeds between 80 and 85 knots. Thousands of emergency servicemen and first responders – the unsung heroes – stood fearlessly in the face of torrential rain, deafening thunderstorms and eight-foot-high waves that crashed onto the Dhofari coast. Police helicopters stationed in wilayat Thumrait conducted several round-the-clock flights to support relief efforts in the aftermath of Cyclone Mekunu and numerous public and private businesses provided financial aid and equipment to help ease the lives of those affected.
Moreover, the General Commission for Civil Defence and Ambulance responded to 102 humanitarian relief cases during tropical Cyclone Mekunu and rescued nearly 200 people. The number of trapped vehicles rescued was 38. The number of cases of those trapped in flooded houses was 27. There were numerous cases of medical conditions that were treated, and the Commission’s operations centre received various fire reports, among other cases.

June
(June 4)
New temporary work permits for expats
Oman’s government planned to permit the recruitment of non-Omani workers under temporary employment licences in specific specialised jobs for a set period of time. The specified professions included medical, academic, technical, consultancy, expertise and training, according to the Implementation Support and Follow-up Unit’s annual report.
This amendment was being pursued as a measure to manage business needs requiring expatriate specialists for a limited period of time. Therefore, the aforementioned jobs were identified and updated on a yearly basis by the Ministry of Manpower due to the demands of the labour market.
The government also worked on a structure to allow the flexible movement of expatriate workers in the Sultanate to enhance labour mobility between companies registered within the same group or entity.

(June 25)
New short-stay visa announced in Oman
The Inspector General of Police and Customs issued decision No. 129/2018, to amend some of the provisions of the Executive Regulations of the Aliens Residence Law. Two new visa fees were added to the list of entry visas in Article 29 of the regulation on residence law 63/96. First, tourists can now pay OMR5 to enter the Sultanate for 10 days, and secondly, the fee for a visa transfer application is OMR50 and non-refundable. Among the amendments were dividing tourist visas into three sections: 10 days, one month and one year.

(June 25)
Now expats can become sponsors in Oman
Lieutenant General Hassan bin Mohsin Al Shuraiqi, Inspector General of Police and Customs, issued Decree number 129/2018 to amend some of the provisions of the Executive Regulations of the Aliens Residence Law. According to the decision, expats who work in government agencies could now sponsor a domestic worker. The amendments allowed foreigners who own certain properties in the Sultanate to receive a visa without a sponsor, and expatriates working for a government agency to become sponsors themselves.

July
(July 5)
New luggage handling fees at Muscat airport announced
Oman Airports imposed fees on specific manually handled luggage at Muscat International Airport and Salalah Airport that came into effect on July 15, 2018.
The procedure came in a bid to reduce the number of pieces of luggage that cannot be handled through the luggage handling system due to their size, weight or quality, which may suffer a loss or damage during the handling process. It also aimed at enhancing the efficiency of the ground luggage services provided through Oman Airports and is in line with international systems.

(July 10)
Self-serve fuel in Oman or pay an extra rial
In the wake of the decision by Adnoc in the United Arab Emirates to introduce a self-service option or a fee of AED10 to have a pump attendant refuel customer vehicles, Mahmoud Al Auwfi, head of the CEO office of Al Maha Oil Company, felt the views of residents should be sought before any decision is taken. He said that plans for the self-service or a small fee at the local petrol stations were already in the works but before introducing such a plan, a questionnaire would be conducted to know how people would react to the new move.

August
(August 9)
Private companies must pay salaries early for Eid
The Ministry of Manpower announced that on the occasion of Eid Al Adha, all private companies in Oman must pay employees their salaries for the month of August no later than August 19, 2018.
According to the Minister of Manpower, Abdullah Al Bakri’s, decision, all companies that came under the provisions of the Labour Law should have paid the salaries of employees by the specified date.

(August 13)
New labour law rules to protect expat workers in Oman
Oman’s Ministry of Manpower introduced a raft of new regulations to help protect the rights of expat workers in Oman. These include the protection of expats who received their no objection certificates (NOCs) from being reported as absconding by their employers. The new decision also revealed that any company that made more than five complaints a month would be investigated by the authorities.
The decision also included information on the procedures and consequences of reporting an absconding employee. According to Article 11, the worker will have the right to object to the report within 60 days from the date of the adoption of the notice, by submitting a written request to the competent department, together with evidence supporting the denial of the complaint. If the competent department proved that the report is false, the report would be revoked. However, if the report is found to be correct and his/her objection is unjustified, the worker would be fined between OMR400 and OMR800.