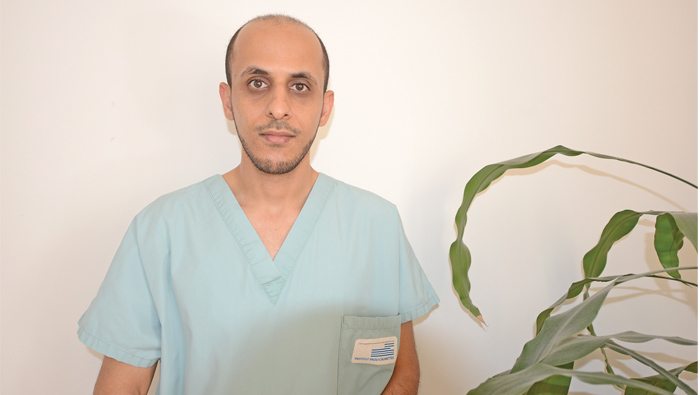 Muscat: In a remarkable achievement, an Omani doctor and surgeon trainee, Abdallah Yahya Al Farai, participated as part of a team of specialised surgeons, in diagnosing and extracting a very rare case of a pedunculated giant hepatic hemangioma. Prior to the operation, the patient was suffering from diarrhoea, vomiting, and epigastric pain, which increased while coughing or leaning forward. The tumour, which was discovered in the Department of Surgical Oncology at the Institute of Paoli Calmettes in Marseille, France, where Al Farai trains and works, has been classified as the largest tumour of its kind in the world, when compared to the 19 other registered cases worldwide and published in scientific journals.
The patient had suffered a blunt abdominal trauma at work one month prior to his presentation. The clinical examination revealed a huge palpable abdominal mass occupying most of the epigastric and right hypochondriac region. The blood tests were almost normal. However, the abdominal ultrasound showed a voluminous (18 × 10 cm) heterogeneous mass located in the epigastric region in front of the pancreas and pushing the left liver lobe anteriorly and laterally. The abdominopelvic contrast-enhanced CT scan showed a voluminous prepancreatic tissue tumour with heterogeneous predominantly peripheral enhancement, measuring some 20 × 9 × 16 cm.
According to Al Farai, the patient had no specific familial and medical personal history, except allergic asthma and active smoking. However, digestive symptoms persisted and a clinical examination confirmed this voluminous palpable abdominal mass. The case was then discussed in the Sarcoma Multidisciplinary Board, and the diagnosis of giant pedunculated liver hemangioma was suspected, and later confirmed. Such benign hepatic tumours are very difficult to diagnose because of their exophytic development.
Al Farai continued, “We decided to perform a liver MRI which showed several typical hemangioma disseminated throughout the liver, with classical enhancement after a contrast injection. The largest one was a pedunculated hemangioma originating from the third hepatic segment, with exophytic development, descending in the epi- and mesogastric region, pushing the pancreas backwards. The dimensions were 20 × 8 × 14 cm, the largest among reported cases worldwide. Due to the risk of torsion and rupture, the surgical excision was performed without any preoperative biopsy. Subsequently, through a large median laparotomy incision, a left hepatic lobectomy was carried out without any intraoperative incident. The patient was discharged from the hospital on the fourth day after the surgery. A team of three specialised surgeons participated in the surgery.”
Speaking about his experience, Al Farai said, “It was an exceptional experience, being part of the surgical team responsible for handling a case of such rarity in the world. There are only 19 documented cases worldwide for giant hepatic hemangioma and the case my team has successfully treated was the largest among them, which makes it a reference case worldwide. We have compiled a detailed case report to be used by specialists around the world. I’m proud that my name is listed among the small group of doctors who oversaw the report.’’
Al Farai is a graduate of Sultan Qaboos University and is about to complete General/Internal Surgery specialisation at the Aix-Marseille University in France. He is also preparing to start a rigorous specialisation in liver and pancreatic surgery at the Department of Surgical Oncology in the Institut Paoli-Calmettes in Marseille, France.