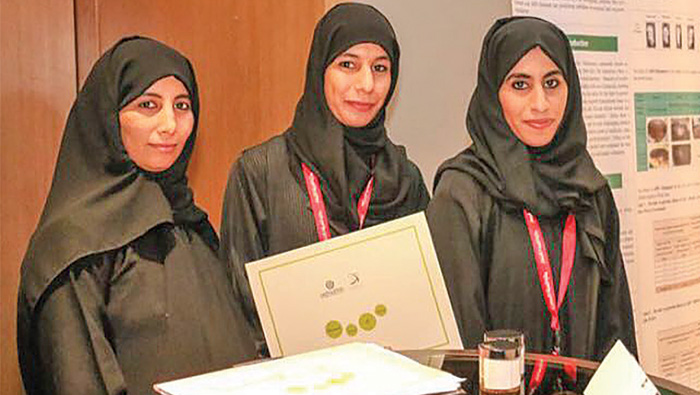 Muscat: Three young Omani women have successfully developed a hair cream that reduces hair loss and thinning. This came after they used their uncles as guinea pigs to ensure that the cream works.
Three girls from the Higher College of Technology, Heba Al Ghafri, Sharifa Al Qaitaiti, and Faiza Al Khatiri, helped create the cream from the root of a Cherimoya plant, known in Arabic as “Al Mustaafl” and obtained a patent from the Ministry of Commerce and Industry to produce it.
Speaking to the Times of Oman, the students said, “Our product has proved its efficiency, and now we are looking for an investor to manufacture the product in larger quantities and distribute it to a wider range of people.”
**media[945066]**
Al Ghafri said: “First, we tried the product on laboratory rats after shaving their hair. We noticed that their hair began to regrow after three days of using the cream, which is a short time frame compared to the normal rate of hair growth. After we were sure of its positive results, we tested the cream on volunteers who suffered from hereditary baldness and hair loss. After a month of using the cream, we noticed the appearance of new hair follicles, in addition to an increase in the thickness of hair.”
The cream helps increase the volume and thickness of hair and even regrow it. Al Ghafri said, “A dermatologist tested the product on a patient with a hair loss problem and saw effective results; my uncle and my colleague’s brother also tested the product and saw good results.”
Majid Al Qatiti, a volunteer, said: “I used the cream for three months, twice a day, and observed a huge change in the thickness of my hair. Earlier, I was suffering from hair loss and a bald patch, but now my hair is actually growing.”
“The dermatologist told me that I have a thick fat layer on my head, which prohibits hair from growing. The cream helped me reduce the fat so the hair could start growing naturally,” Al Qatiti said, describing his experience with the scalp cream. He is all set to buy larger quantities of the product and hopes that it will be available to all of those who are in need of such a cream.
He said, “As someone who has benefitted from the cream, I request the governmental authorities or an investor to support the students manufacture their product in large quantities, because it will help a lot of people who have hair problems; it is also a natural product and made from trees that are abundant in the Sultanate.”