From breaking news to exciting events, Oman saw it all in 2018 - Part I 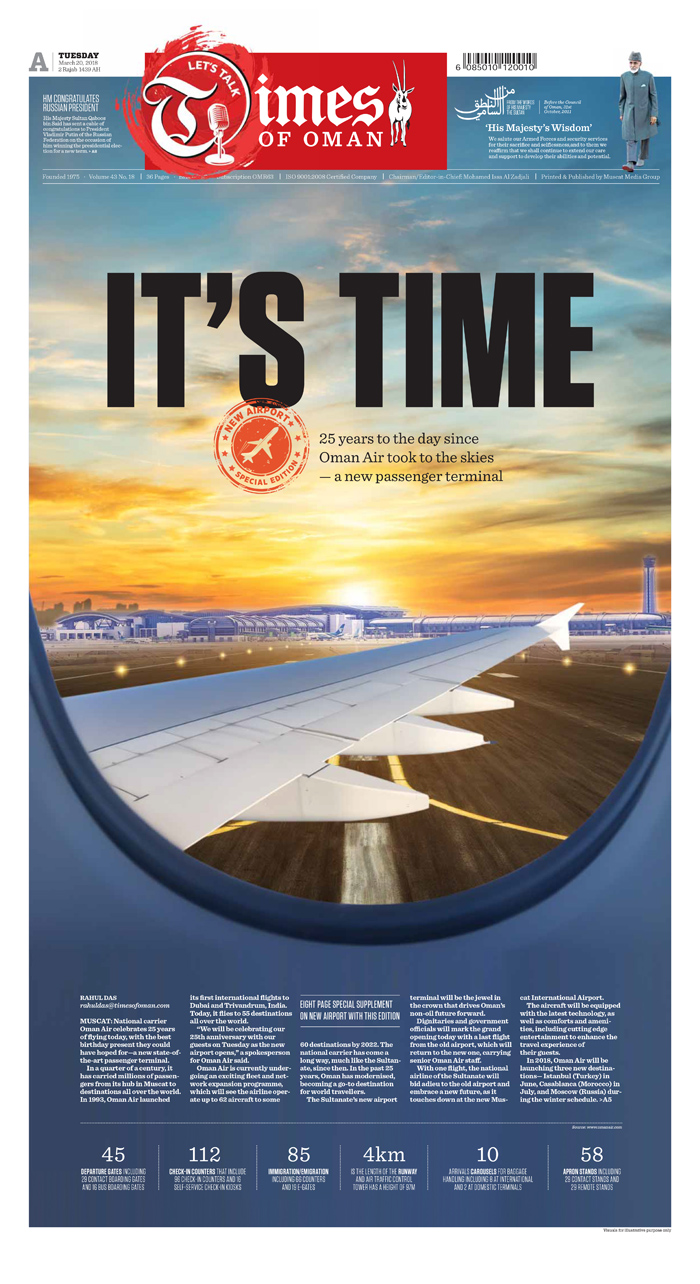 January to April
Muscat: As we bid adieu to 2018 and welcome 2019, Times of Oman brings you part one of the perfect round-up over the next three days of some of this year’s most exciting events and news.

January
(January 29)
Oman to temporarily stop issuing expat visas for 87 jobs
A six-month ban on hiring expat workers in 87 job roles was imposed by the Ministry of Manpower from January 25, 2018. The decision came into effect following a ministerial decree issued by Abdullah bin Nasser Al Bakri on January 24, 2018. Sectors affected by the ban include IT, media, air traffic, engineering, accounting and finance, technicians, insurance, marketing and sales, administration and HR.
(January 30)
Amended traffic laws to improve Oman’s road safety
The Royal Oman Police went on the offensive against unsafe driving with a host of strict new rules designed to make the Sultanate’s roads - and users - safer. Seatbelts for all, car seats for children, a new points system, renewal of driving licence for expats every two years, and fines were raised for various offences under the new rules. Moreover, Omani women were also allowed to operate taxis and trucks from March 1, 2018, in an effort to boost employment prospects for Omanis.

February
(February 11/12)
Indian Prime Minister Narendra Modi arrives in Oman on two-day visit
Narendra Modi, Prime Minister of India, arrived on a two-day visit to the Sultanate during which he was given an audience by His Majesty Sultan Qaboos bin Said at Bait Al Barakah. His Highness Sayyid Fahd bin Mahmoud Al Said, Deputy Prime Minister for the Council of Ministers, led the welcome party for the guest and his accompanying delegation upon their arrival at the Royal Airport. Modi thanked HM Sultan Qaboos bin Said before leaving Oman, as he ended his trip to the Sultanate with visits to the Shiva temple and the Sultan Qaboos Grand Mosque.
(February 25)
New rules for sending money abroad from Oman
Exchange houses in Oman adopted new features to safeguard both themselves and customers against money laundering. In a new move, customers have to declare the source of their funds while remitting or changing money if the amount is more than their earnings. According to the guidelines issued by the Central Bank of Oman with regard to the Anti-Money Laundering Law, transactions of over OMR400 have to undergo Enhanced Due Diligence. The sender has to prove both legal and financial status in the country via bank account details, and/or resident card, as well as the purpose of remittance for each transaction.

March
(March 19/20)
Muscat International Airport opens
The new Muscat International Airport opened with a “silent” terminal. With nearly 45 years between the old and the new Muscat International Airport, many considered the wait to be worth it. The passenger terminal covers a total area of 580,000 square metres and is equipped with the latest technology and state-of-the-art facilities. The new design of the airport provides all the services and latest technologies for passengers and airlines with the flexibility to increase its current capacity of 20 million passengers. In addition, the e-visa service was introduced to facilitate passengers’ journey and to prevent unnecessary queues at the visa-on-arrival desk at the airport’s counter.
(March 29)
Six expats arrested over phone call scam in Oman
Six expats of “Asian” nationality were arrested in connection with a phone call scam by the Anti-Crime and Investigation Forces. Several mobile phones, SIM cards and other communication devices were found when they arrested the accused, who indulged in electronic fraud by contacting people and deceiving them, saying they had won cash prizes.
(March 31)
New Indian School building inaugurated in Oman
The new school premises of Indian School Rustaq was inaugurated on March 28 by Wilson V. George, the outgoing chairman of the Board of Directors (BoD) of Indian Schools in Oman, in the presence of Khalid Al Shuhumi, Deputy Director of Private Schools Department, Al Rustaq. It was a joyous occasion, and a dream come true for the Indian community at Rustaq to see better infrastructure for the school, following the efforts of the BoD and SMC for over a year.

April
(April 9)
Extra sectors for expat visa ban in Oman
A six-month visa ban on expat workers across 87 sectors was imposed by the MoM from January 25, 2018. The decision came into effect following a ministerial decree issued by Abdullah bin Nasser Al
Bakri, Minister of Manpower, on January 24, 2018. Sectors affected by the ban include IT, media, air traffic, engineering, accounting and finance, technicians, insurance, marketing and sales, administration, and HR. The ban will be fully reviewed at the end of the ban period, towards the end of July this year.

(April 25)
Visa agreement allows tourists from 33 countries to enter Oman for free
Due to the joint visa agreement between Oman and Qatar, visitors from 33 countries were allowed to enter Oman without a visa. This agreement was done to stimulate the tourism sector between the two countries, and to facilitate the exchange of tourists through the issuance of joint tourist visas, according to a list approved by both sides.
The listed countries are United States of America, France, Germany, Greece, Iceland, Ireland, Italy, Canada, Australia, Japan, Belgium, Austria, Denmark, Finland, Monaco, Vatican, Luxembourg, Netherlands, Norway, Portugal, Spain, Sweden, Switzerland, United Kingdom, San Marino, Liechtenstein, Brunei Darussalam, Singapore, Malaysia, Hong Kong, New Zealand, Andorra and South Korea.
This meant that a foreign tourist who has a tourist visa issued by Qatar can enter Oman without paying any fees, provided that he/she does not enter another country before the Sultanate, and vice versa. If the visa is granted by Oman, the foreigner must complete the application form with a stamp on his/her passport in a form that will allow him/her to enter Qatar.