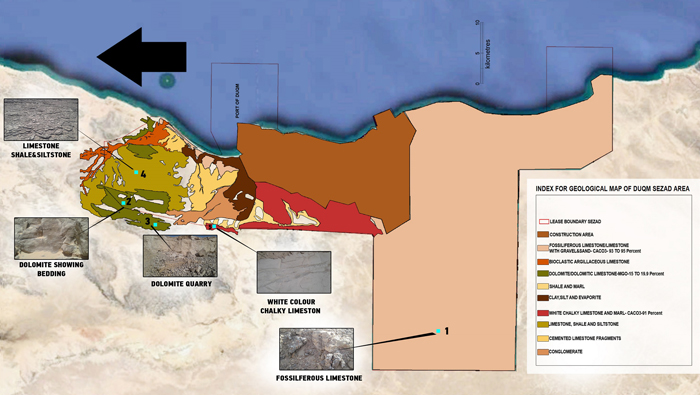 Muscat: Duqm Quarries Company announced the completion of the mining map for the Special Economic Zone in Duqm (SEZD).
Eng. Ali bin Abdullah Al Zidjali, General Manager of the company, said that the map determines the types of minerals in Duqm, their locations, their quantities and their quality. He pointed out that the map is interactive and that the company will upload it on its website scheduled to be launched in the coming weeks.
He added in an interview with Duqm Economist published in its issue for next January that the aim of the preparation of the mining map is to know the types and quality of minerals in Duqm and thus market them professionally to achieve the objectives of the company in attracting international companies to invest in this vital sector. Such investment will be in the form of establishment of factories in SEZD to increase the value of available minerals rather than exporting them abroad. He stressed that the company does not have any directions for the export of raw materials outside the Sultanate, but focuses on their exploitation in the Sultanate, which leads to the enhancement of the value added.
He said that the mining map will be marketed locally and internationally in order to attract local and international companies to invest in this vital sector.
Duqm Quarries Company was founded in 2017 with the aim of managing and operating the quarrying and mining sector in SEZD. Tatweer, owned by the Special Economic Zone Authority in Duqm (Sezad), owns 70 per cent of the shares of Duqm Quarries Company; a number of other companies, notably Duqm Al-Ahliya, owned by the people of Duqm, holds the remaining shares.
Prominent minerals
Eng. Al Zidjali indicated that SEZD is rich in many minerals, including limestone, which has a purity of calcium carbonate between 85 per cent and 98 per cent. He explained that limestone is used in many industries, such as dyes, cement clinker poultry feed, fertilizers, pharmaceuticals, cleaning preparations, glass, plastics, and many other industries.
He pointed out that the dolomite stone is also found in abundance in Duqm, and the percentage of magnesium found in it is between 14 per cent and 24 per cent, noting that the dolomite enters many industries, notably iron and its derivatives.
Shomookh Complex
The General Manager of Duqm Quarries Company praised the establishment of the Shomookh Mining Industries Complex in SEZD. He said that the complex translates the Sultanate's orientations to exploit local raw materials in establishing industries that raise the economic value of the raw materials available in the country.
He added that the complex is a model for the mining complexes envisaged in the Sultanate. Its idea includes attracting local and international companies to establish factories based on local raw materials. Shomookh Company has succeeded in attracting eight international companies to invest in this complex until mid-December 2018.
He said that Duqm Quarries Company would supply these factories with raw materials located in its concession area in SEZD. He welcomed the local and international companies wishing to establish factories that raise the economic value of these minerals.
He called on local companies to benefit from local raw materials instead of importing them from abroad.
Support economic development
Eng. Al Zidjali asserted that the company is committed to supporting the economic development of SEZD by providing raw materials for companies and projects operating there.
He said that since its establishment in 2017, the company has provided many raw and filling materials for the factories and companies operating in SEZD along with 3.8 tonnes of rock and rubble for infrastructure projects in SEZD from January until the end of November 2018.