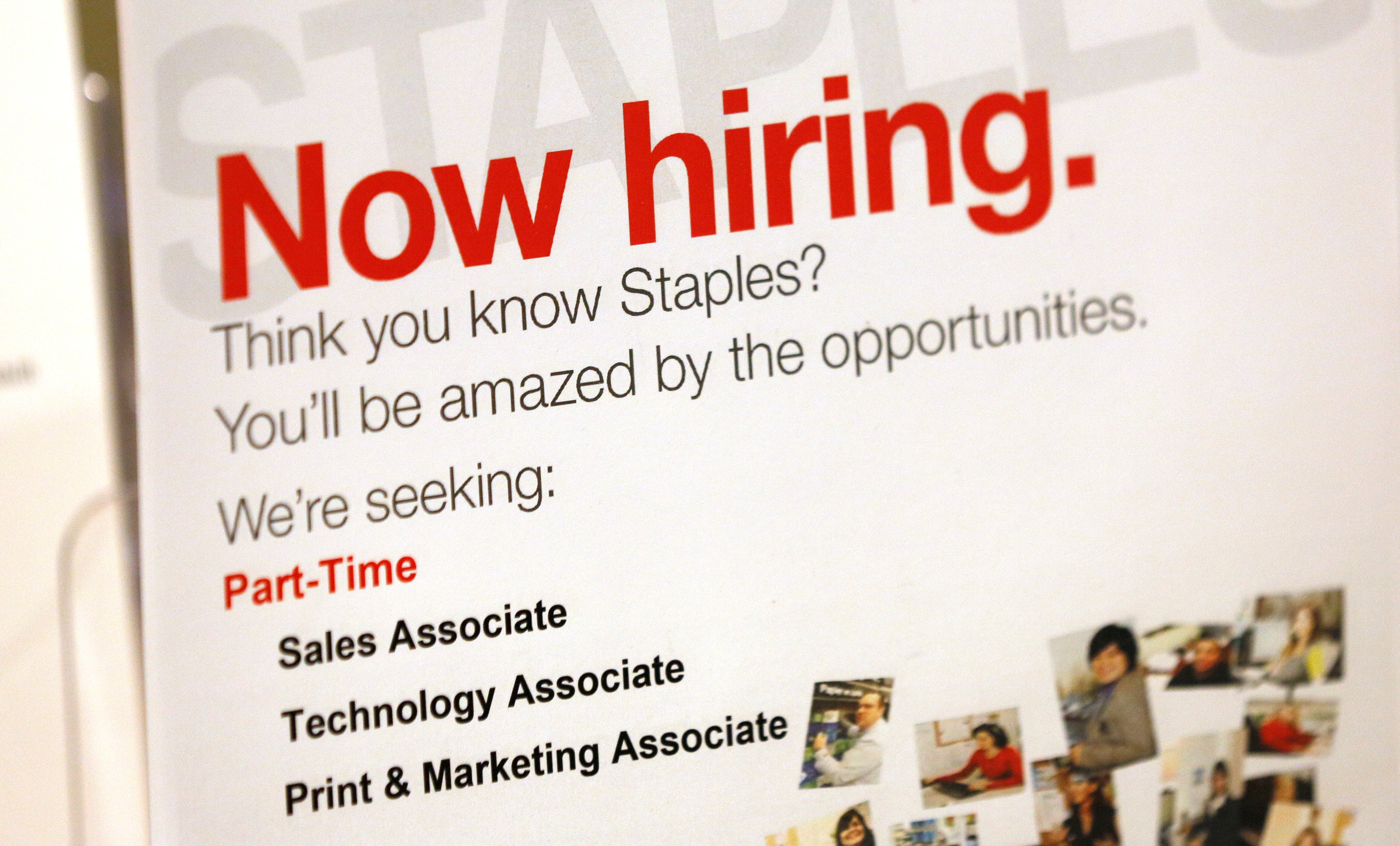 Washington: US job growth slowed sharply in September likely as Hurricane Florence depressed restaurant and retail payrolls, but the unemployment rate fell to near a 49-year low of 3.7 per cent, pointing to a further tightening in labour market conditions.
The Labor Department's closely watched monthly employment report on Friday also showed a steady rise in wages, suggesting moderate inflation pressures, which could ease concerns about the economy overheating and keep the Federal Reserve on a path of gradual interest rate increases.
Nonfarm payrolls increased by 134,000 jobs last month, the fewest in a year, as the retail and leisure and hospitality sectors shed employment. Data for July and August were revised to show 87,000 more jobs added than previously reported.
The economy needs to create roughly 120,000 jobs per month to keep up with growth in the working-age population.
"The weaker gain in payrolls in September may partly reflect some hit from Hurricane Florence," said Michael Pearce, senior US economist at Capital Economics in New York. "There is little in this report to stop the Fed continuing to raise interest rates gradually."
Economists polled by Reuters had forecast payrolls increasing by 185,000 jobs in September and the unemployment rate falling one-tenth of a percentage point to 3.8 per cent.
Fed Chairman Jerome Powell said on Tuesday that the economy's outlook was "remarkably positive" and he believed it was on the cusp of a "historically rare" era of ultra-low unemployment and tame inflation.
The US central bank raised rates last week for the third time this year and removed the reference in its post-meeting statement to monetary policy remaining "accommodative."
The Labor Department said it was possible that Hurricane Florence, which lashed South and North Carolina in mid-September, could have affected employment in some industries. It said it was impossible to quantify the net effect on employment.
Payrolls are calculated from a survey of employers, which treats any worker who was not paid for any part of the pay period that includes the 12th of the month as unemployed. The average workweek was unchanged at 34.5 hours in September.
The smaller survey of households from which the jobless rate is derived regards persons as employed regardless of whether they missed work during the reference week and were unpaid as result. It showed 299,000 people reported staying at home last month because of bad weather, compared to an average of 85,000 for a normal September.
The weakness in payrolls last month is not corroborated by other labour market data. An Institute for Supply Management survey published this week showed robust employment gains in the services sector in September.
Economists also noted that the initial September payrolls growth estimate tended to be revised higher.
US Treasury prices fell, with the yield on the 30-year bond rising to a four-year high. The dollar was little changed against a basket of currencies, while stocks on Wall Street were trading lower.
Diminishing slack
The drop of two-tenths of a percentage point in the unemployment rate from 3.9 per cent in August pushed it to levels last seen in December 1969 and matched the Fed's forecast of 3.7 per cent by the end of this year.
Average hourly earnings increased 0.3 per cent in September after a similar rise in August. With September's increase below the 0.5 per cent gain notched during the same period last year, the annual rise in wages fell to 2.8 per cent from 2.9 per cent in August, which was the biggest advance in more than nine years.
Wage growth remains sufficient to keep inflation around the Fed's 2 per cent target.
Some economists say wage growth might be understated amid anecdotal evidence that worker shortages as a result of the tightening labour market were forcing companies to raise compensation. Online retail giant Amazon.com announced this week that it would raise its minimum wage to $15 per hour for US employees starting in November.
"Businesses of all sizes are indicating they are doing whatever they can to keep their workers," said Joel Naroff, chief economist at Naroff Economic Advisors in Holland, Pennsylvania. "The standard measures just don't reflect those increases well, if at all."
Last month, employment in the leisure and hospitality sector fell by 17,000 jobs, the first drop since September 2017, with payrolls at bars and restaurants tumbling by 18,200. Retail payrolls dropped by 20,000 jobs in September amid widespread declines across the sector.
Manufacturing payrolls increased by 18,000 in September after rising by 5,000 in August. Construction companies hired 23,000 more workers last month after increasing payrolls by 26,000 jobs in August.
Professional and business services employment increased by 54,000 jobs last month and government payrolls rose 13,000.
While surveys have shown manufacturers growing more concerned about an escalating trade war between the United States and China, it does not appear to have affected hiring. In fact, the Fed's latest survey of national business conditions reflected concerns about labour shortages that are extending into non-skilled occupations as much as about tariffs.
Washington last month slapped tariffs on $200 billion worth of Chinese goods, with Beijing retaliating with duties on $60 billion worth of US products. The United States and China had already imposed tariffs on $50 billion worth of each other's goods. The trilateral trade agreement between the United States, Canada and Mexico was salvaged in an 11th-hour deal on Sunday.
Despite the Trump administration's protectionist trade policy, the trade deficit continues to deteriorate. The trade gap surged 6.4 per cent to a six-month high of $53.2 billion in August, the Commerce Department reported on Friday.
The politically sensitive goods trade deficit with China increased 4.7 per cent to a record high of $38.6 billion.
"Growth in imports likely will remain solid in coming quarters as long as growth in domestic demand remains buoyant," said Jay Bryson, global economist at Wells Fargo Securities in Charlotte, North Carolina.