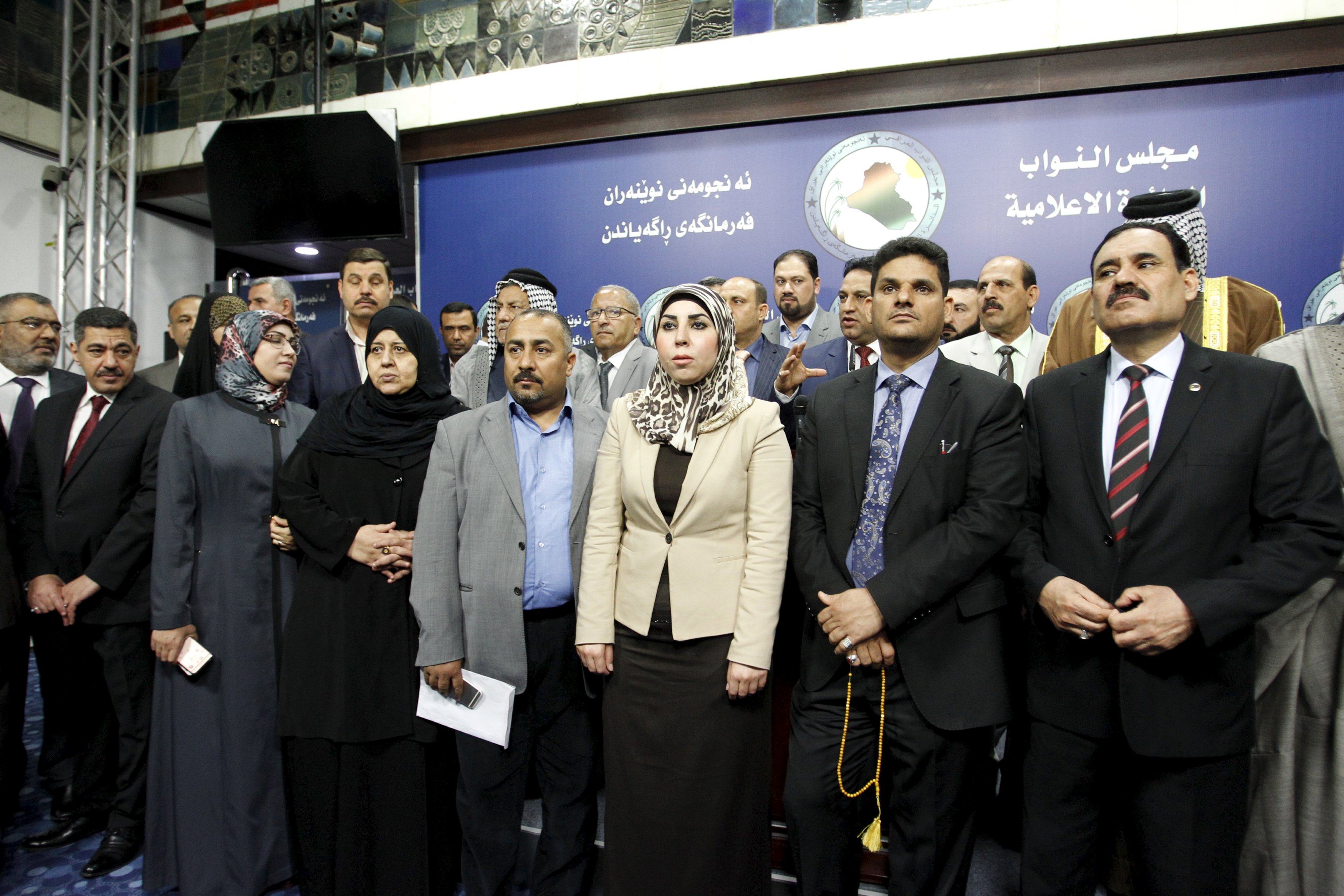 Baghdad: Iraq's parliamentary speaker Salim Al Jabouri may request the dissolution of the assembly after ministers scuffled during a chaotic parliamentary session on Wednesday over a plan to overhaul the government that aims to tackle graft.
The possibility of holding new elections in Iraq was raised after state TV reported that Al Jabouri was considering the future of the current assembly.
According to Iraqi constitution, dissolving the parliament requires the approval of the majority of the lawmakers at the request of one third of the assembly, or the approval of the president at the request of the prime minister.
Parliament convened at the request of several dozen Members of Parliament (MPs) who began on Tuesday evening a sit-in inside the parliament building to demand that Prime Minister Haider Al Abadi sticks to his plan to introduce a cabinet of independent technocrats.
The cabinet reshuffle is part of long-promised anti-corruption drive that Abadi needs to deliver. Or he risks weakening his government as Iraqi forces mount a campaign to recapture the northern city of Mosul from IS militants.
Quarrels broke out between the protesting MPs, prompting Jabouri to adjourn the session to Thursday, state TV said.
A dispute between Kurdish and majority community lawmakers developed into a tussle, where they shoved and hit each other, according to witnesses.
The Kurds opposed a demand by the some MPs to seek the resignation of President Muhammad Fuad Masum, a Kurd, together with Jabouri, and Abadi, the witnesses said.
In central Basra, the largest city in southern Iraq, several hundred supporters of cleric Moqtada Al Sadr blocked the main street, demanding that a non-partisan government be formed.
"We're staying here until our demands are met," said one demonstrator, setting up a tent in front of the provincial council building.
Street protests were also held in other southern Iraqi cities while a rally took place in Baghdad.
Sadr, whose opinion holds sway over tens of thousands of followers, agreed to end street protests his supporters had been holding since late February after Abadi presented his line-up for an independent cabinet of technocrats last month.
The 14 names, many of them academics, he put forward were part of reforms aimed at freeing ministries from the grip of a political class he has accused of using a system of ethnic and sectarian quotas instituted after the US-led invasion in 2003 to amass wealth and influence.
But he was forced to present a modified list on Tuesday after parliament's dominant political blocs rejected the initial one and insisted on putting forward their own nominations.
The vote on the modified cabinet list had been scheduled to take place on Thursday. Jabouri has yet to confirm whether the voting session will be held as planned.
"We, the MPs holding the sit-in parliament building... demand that a government of technocrats and professionals be formed, away from the quota system that allows the political blocs to split the rights of the people among themselves," said lawmaker Ahmed Al Jobouri in a statement.
The dominant blocs in the 328-member parliament back Abadi's modified line-up, which includes some of their own candidates.
Pressure on Abadi to reform government has come from the clergy of the majority community and popular discontent at the lack of basic public services in a nation facing an economic crisis caused by falling oil prices.
Many of the protesters inside parliament are Sadr's supporters along with some MPs representing the minority minority.
Iraq, a major OPEC exporter which sits on one of the world's largest oil reserves, ranks 161 out of 168 on Transparency International's Corruption Perceptions Index.