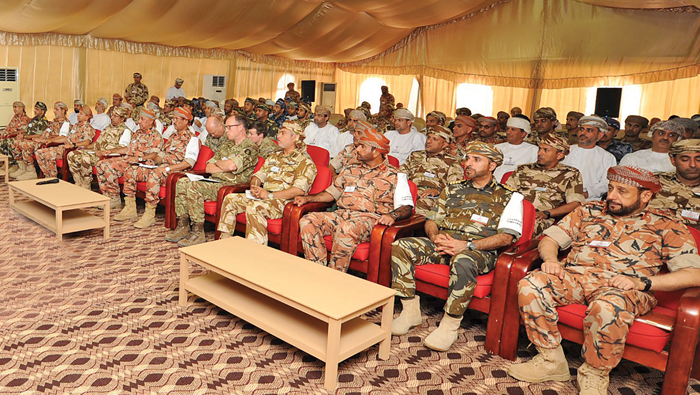 Muscat: The various military, security and civil organisations continue their participation in the second day of the Al Shomoukh-2 national exercise and prepare for the Swift Sword-3 (SS3) exercise that will be implemented with the Royal British Armed Forces according to the preset plans for the exercises.
The exercise aims at ensuring ability of the sectors to carry out the joint national duties, addressing different national issues aimed at strategic operational and mobilisation levels to achieve the objectives.
On the participation of the military and security services in the exercise a number of commanders gave the following statements to the Moral Guidance in which they talked about the readiness and capabilities of the military and security sectors.
Maj. Gen Matar bin Salim Al Balushi, Commander of the Royal Army of Omani (RAO) said that all brigades, formations and units of RAO have received special care from His Majesty the Sultan, the Supreme Commander of the Armed Forces.
He noted that the modernisation plans continue to ensure improving the levels of performance in different areas and fields. He added that RAO takes part as a key component of the Al Shomoukh-2 and SS3 military exercises.
Air Vice-Marshall Matar bin Ali Al Ubaidani, Commander of the Royal Air Force of Oman (RAFO) said that “within the context of care and attention accorded by His Majesty Sultan Qaboos bin Said, the Supreme Commander of the Armed Forces that the joint SS3 military exercise will be implemented in the coming days by the Sultan’s Armed Forces and the Royal British Forces.
He noted that the exercise, whose planning continued for almost three years, will be implemented according to modern war management systems to achieve the prospective aim behind it.
On his part, Maj. Gen Hamad bin Sulaiman Al Hatimi, Assistant Inspector General of Police and Customs for Operation said that the participation of the Royal Oman Police (ROP) in Al Shomoukh-2 and the SS3 military exercise comes in a bid to develop ROP capabilities and ensure more integration and harmony between ROP command and other military and civil organisations
taking part.
Meanwhile, the Media Plan for Al Shomoukh-2 and Swift Sword-3 (SS3) exercises has been activated by the Media Centre of the two exercises, from the first day by receiving media coverage and documentation of activities and events, and also organising press conferences related to the exercises.
A number of media professionals from various media organisations in the Sultanate are taking part in the media centre along with their colleagues from the military media. The Centre is responsible for media production as well as social media. It is the sole and official source of all information related to the two exercises. It also manages the official exercises account on the Twitter.
The Media Centre will host a press conference at 10:00 AM on October 5, in which the representatives of the British Royal Armed Forces will participate in the presence of governmental and private media institutions.