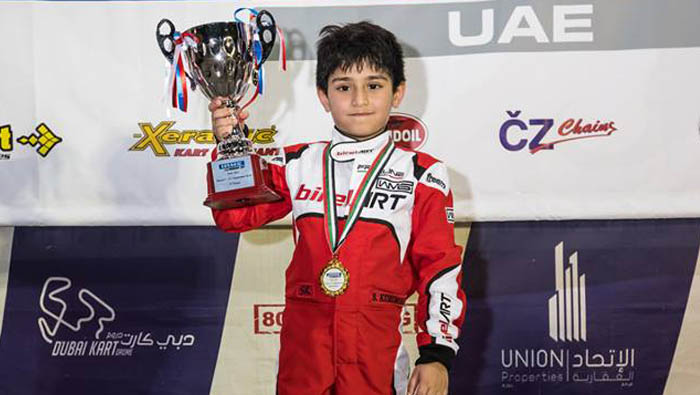 MUSCAT: The first round of the UAE Rotax Max Challenge Championship Bambino Category for the 5-8 age group which kicked of the Dubai Kartdrome during the weekend will feature Oman’s latest driving sensation Shonal Kunimal when he takes to the track. This year’s challenge has seen an enhancement in the races with four time trials each consisting of 10 minutes instead of three which was held last year.
Seven year old Shonal Kunimal a second grade student from Indian School Al Ghubra - International is the Overall Champion of the 2017-18 UAE Rotax Max Challenge Championship in the Bambino Category.
At this year’s opening round of the championship Shonal got off to a flying start to finish second behind the leader Adam Awan who took the top spot with Leonidas Peruzzi coming in third place. There are seven more rounds of the UAE Rotax Max Challenge left in the season.
In the first time trail Shonal clocked 1:23.023 sec, then in the second time trial he shaved off almost a second with a time of 1:22.496 secs. The third time trial Shonal was timed at 1:21.129 secs. In the fourth and final attempt he dropped to 1:23.367 secs which was +0.422 secs behind the leader leaving him with a total of 76 out of a maximum of 80 points.
At the end of the time trails, Shonal thanked his team of mechanics from Oman Automobile Association, Coach Sanad Al Rawahi.
Shonal Kunimal was recently declared the first round winner of the 2018-19 IAME X30 held at the Dubai Kartdrome winning all three time trials with an accumulative 150 points, he was also the runners up at the 2017-18 IAME X30 Championships in the Bambino Category.