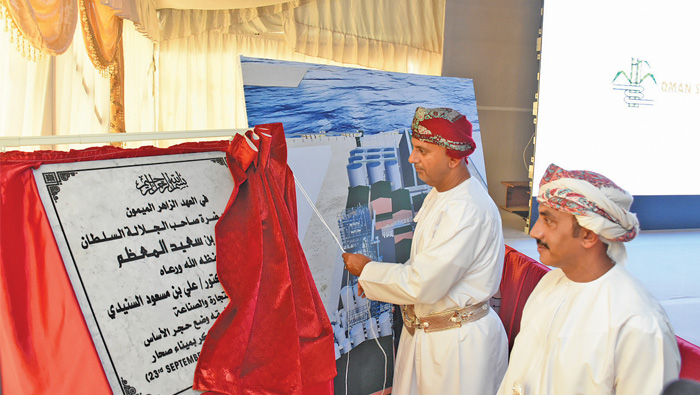 Sohar: The foundation stone of Oman Sugar Refining Plant was laid on Sunday at Sohar Port under the patronage of Dr. Ali bin Masoud Al Sunaidy, Minister of Commerce and Industry, in the presence of Sheikh Muhanna bin Saif Al Lamki, Governor of North Al Batinah, a number of undersecretaries and a group of businessmen.
The construction cost of the plant is estimated at $350 million on 188,000 square metres with a production capacity of one million tonnes annually according to the highest international standards.
It will be equipped with European production lines and will operate according to the latest technologies available in the field of high quality refined sugar production to be distributed locally, regionally and globally.
The factory also provides employment opportunities for Omani youth, with the Omanisation rate starting at 30 per cent to reach 90 per cent over the next ten years.
In a speech, Mark Geilenkirchen, the Chief Executive Officer of Sohar Port, talked about the port management strategy in enhancing the presence of food industries in the free zone and attracting many investments from the public and private sectors in projects related to food industries.
Nasser Al Hosani, General Manager of Oman Sugar Refining Company said that the plant is the first-of-its-kind in the Sultanate and will provide many opportunities for other industries in the port and the free zone while enhancing the levels of food security in the Sultanate.
He said that they would seek to find employment opportunities to citizens and promote sustainable growth of the country’s
economy.