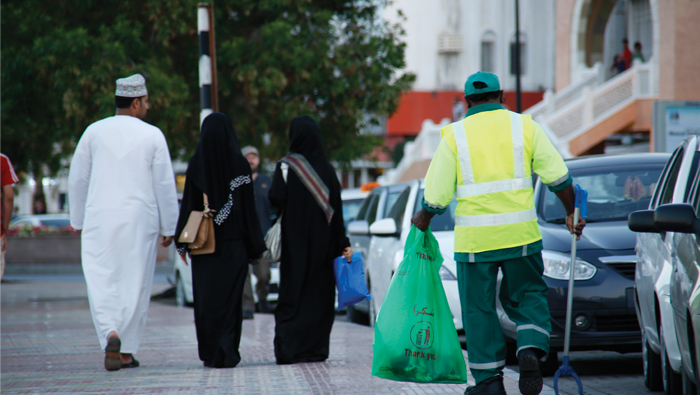 Muscat: Waste produced by Oman crossed 2 million tonnes in 2017. An official from be’ah, Oman’s Environmental Services Holding Company, revealed, “Some 2.1 million tonnes of municipal solid waste was generated in 2017.”
To put that into perspective, that’s around two billion litres of water, enough to fill two football stadiums to the brim. If you were to put all of this garbage into trash bags and line all of it together, you could make a line of trash from Muscat to Salalah not once, not twice, but 10 times over.
Dr. Mohab Ali Al Hinai, Project Manager of the Environmental Center of Excellence at the Oman Environmental Services Holding Company (be'ah), said, “People in the country generate some 1.2kg of waste per person per day, which is around the global average.”
In an exclusive with the Times of Oman, Al Hinai said “these numbers are expected to increase due to population growth. However, we are working on public awareness programmes and campaigns to bring this number down to less than a kg per person per day.”
According to Al Hinai, a simultaneous approach of energy conversion and waste reduction is the way to go for Oman. While waste production can be reduced at the level of residents, it cannot be truly eliminated. Because of this, it is best to reduce waste, and then treat the rest as a resource.
He said, “We believe that the best way to tackle waste is to reduce it at the source, i.e. at the level of the producers and consumers. In order to understand the benefits of producing energy, or any marketable commodity for that matter, from waste, we have to take a more holistic approach so that we can fully realise its merits. The first line of defence against waste is its reduction. However, there will always be waste generated, especially in any modern or urban society.”
“Therefore, a sustainable waste management system is paramount in order to ensure that waste is handled and treated in a fashion that does not pose any health or environmental risks to the community,” added Al Hinai. “The World Energy Council estimates that the global market share for waste-to-energy projects is expected to surpass $25 billion (some OMR10 billion) by 2025. Oman is currently working on creating biogas and a chemical industry from waste, he added.
Al Hinai said, “Oman Environmental Service Holding Company S.A.O.C (be’ah) is currently studying projects concerned with producing energy and steam from waste materials. This is done in coordination with various institutions, such as the Petroleum Development Oman and the Oman Power and Water Procurement Company.”
“There are many countries around the world that are investing in waste-to-energy projects in Europe and Asia-Pacific, as well as other parts of the world,” he added.
“For example, China has more than doubled its waste-to-energy capacity in the last few years and Japan incinerates approximately 60 per cent of its solid waste. There are currently two main technologies that can be deployed to produce energy from waste. The first technology is the Thermochemical conversion process. In this method, the waste can either be incinerated, gasified or pyrolysed to produce heat, power, hydrogen, methane and syngas. The second technology used is the biochemical conversion process.”