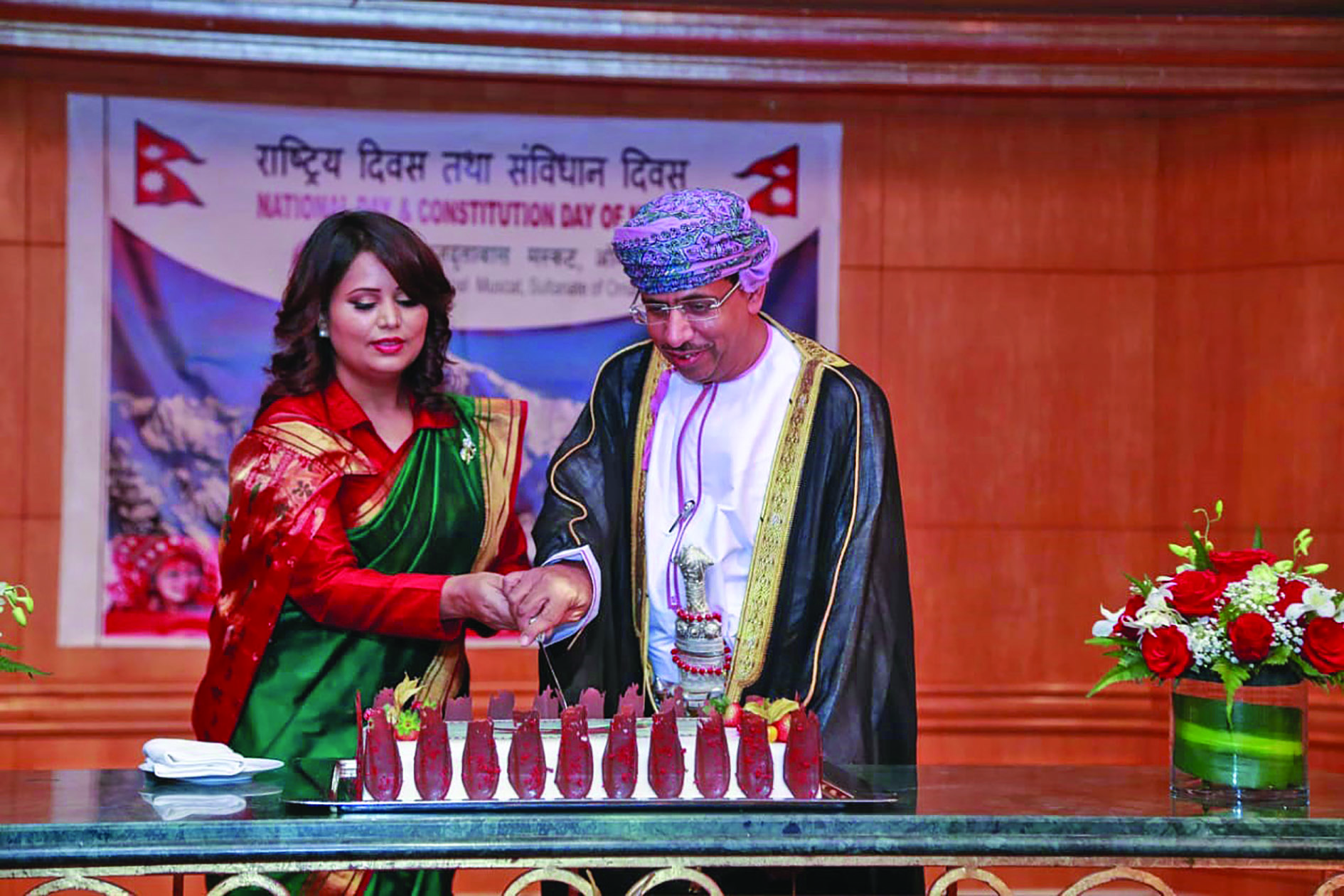 Muscat: The Embassy of Nepal, Muscat, organised a reception on the occasion of the National Day and the Constitution Day of the Federal Democratic Republic of Nepal at Grand Hyatt on Wednesday.
The programme commenced with the national anthems of Oman and Nepal, followed by the welcome speech of Ambassador Sarmila Parajuli Dhakal.
The ambassador described the current initiatives undertaken by the Government of Nepal to implement the constitution, attract foreign investment, enhance the tourism sector, socioeconomic transformation of the country, as well as widen its role in the international arena.
Dhakal highlighted the Nepal-Oman relations that gained momentum with the high-level visit of the then Prime-Minister, Sher Bahadur Deuba, and signing of the “Bilateral Consultations Mechanism” during the visit.
The ambassador also spoke about the various other activities of the Embassy of Nepal.
She extended her best wishes to His Majesty Sultan Qaboos bin Said for his health, happiness and wellbeing, as well as continued peace, prosperity and harmony for the people of the Sultanate. She invited all the guests, their family and friends to visit Nepal.
Dhakal expressed her special thanks to the Government of Nepal for conferring her with the prestigious “Suprawal Janasewa Shree” Medal on the occasion of the National Day and the Constitution Day of Nepal, earlier on the same day. She also said: “I am glad to share with you the good news that just recently, one week ago, SalamAir, the budget airline of the Sultanate started its flight (four flights per week) to Nepal, in addition to Oman Air (20 flights a week). I hope this will further enhance the bilateral ties between the two countries.”
“And, last but not least, I would like to inform you that the Government of Nepal has declared the year 2020 as Visit Nepal Year. Nepal is among the top 10 countries to visit in the world and is considered as one of the preferred destinations in the world.
“So, all of you, your families and friends are sincerely welcome to visit Nepal, the land of the Himalayas with the highest peak of the world, ‘Mt. Everest’, a divine, serene, birth place of Gautam Buddha and a beautiful country with natural diversity, cultural heritage, and friendly and hospitable people,” she said.
After the speech, the Guest of Honour, Dr. Abdulmonam Mansoor Al Hasani, Minister of Information, and Dhakal jointly cut the ceremonial cake.
The event was followed by a musical performance from renowned Omani Singer Haitham Mohammad Rafi who sang the Nepali song, “Euta Mancheko Mayale kati”, and Sewanta Purja Pun, who has been appointed as “Head of Music Theory” at the Royal Cavalry of Oman 2nd Band, played a Nepali tune on the saxophone.
The Embassy also utilized the occasion to promote Nepal’s tourism and culture by displaying photographs and brochures of the main tourist destinations, mountains, cultural and natural heritage in the hotel hallway. A video of Nepal’s main tourist attractions and products were displayed on the screen inside the hall throughout the programme.