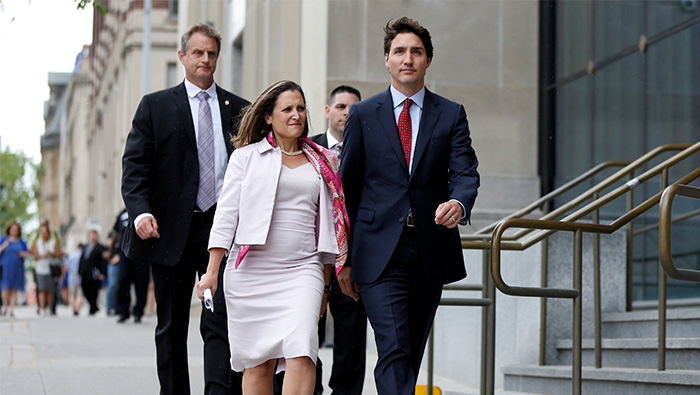 Washington/Ottawa: Canadian Prime Minister Justin Trudeau said on Wednesday he wanted to see flexibility from the United States if the two sides are to reach a deal on renewing NAFTA, which Washington insists must be finished by the end of the month.
Ottawa is pushing back against increasing pressure by the administration of U.S. President Donald Trump and its allies to make the concessions they say are needed for the trilateral North American Free Trade Agreement.
"We're interested in what could be a good deal for Canada but we're going to need to see a certain amount of movement in order to get there and that's certainly what we're hoping for," Trudeau told reporters in Ottawa.
Canadian Foreign Minister Chrystia Freeland met U.S. Trade Representative Robert Lighthizer for their fourth set of talks in four weeks in Washington with the two sides still disagreeing on major issues.
Freeland, leaving their afternoon meeting, told reporters the talks had been constructive and said she would meet Lighthizer again on Thursday.
"We are a country that is good at finding compromises and that's a talent our negotiators certainly demonstrate. At the same time, our core objective... is to defend the national interest," she said earlier on Wednesday.
Trump has already wrapped up a side deal with Mexico and is threatening to exclude Canada if necessary. Canadian officials say they do not believe the U.S. Congress would agree to turn NAFTA into a bilateral treaty.
An influential Canadian private sector union leader, in Washington for consultations with Freeland's team, on Wednesday played down the chances of an imminent agreement.
"Do I believe there will be a deal this week? I don't think so," Unifor boss Jerry Dias told reporters, saying the United States would need to move on some major files.
Trump and Trudeau spoke by telephone late on Tuesday and discussed NAFTA, the Canadian prime minister's office said in a brief statement.
The Republican chairman of the U.S. House of Representatives Ways and Means Committee, Kevin Brady, told CNBC on Wednesday that "Canada needs to really step up here this week" to meet the Oct. 1 deadline set by Washington.
But U.S. Chamber of Commerce President Thomas Donohue said it would be extremely complicated, if not impossible, for the administration to pull off a Mexico-only agreement.
"If Canada doesn't come into the deal there is no deal," Donohue told a media breakfast in Washington.
The Chamber, the most influential U.S. business lobby, wants NAFTA to be renegotiated as a tri-lateral agreement, citing how highly integrated the three member nations' economies have become since the pact came into force in 1994.
Officials are arguing over cultural protections, dispute resolution, and a U.S. demand for more access to Canada's protected dairy market.
Dias said negotiators had spent much of the last day talking about the agricultural sector. Sources say Ottawa has made clear it is prepared to make dairy concessions, which would anger the influential industry lobby.
"For American farmers the Canadian market is a drop in the bucket. For us it's our livelihood," Dairy Farmers of Canada vice president David Wiens told reporters in Ottawa. Concessions in past trade deals had already hurt Canadian farmers, he said.