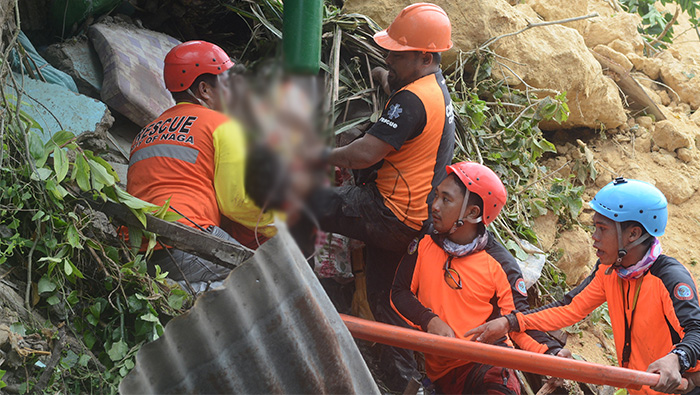 Manila: A landslide triggered by heavy rains on Thursday killed at least four people in the central Philippines, with dozens feared trapped in the latest of a string of deadly incidents over six days.
Four people were pulled out alive after boulders and earth loosened by rain engulfed a cluster of homes near a limestone quarry on the fringes of Naga City on the central island of Cebu.
"The landslide buried about 20 to 24 houses and all the people inside were trapped," regional police official Debold Sinas told reporters.
Rescuers were looking for about 50 to 80 people, city councillor Carmelino Cruz told the ANC news channel.
"The ground is still shaky," Cruz added. "Every now and then you will hear vibrations."
Heavy weekend rains brought by Typhoon Mangkhut caused more than 100 landslides, most in the mountainous Cordillera region on the main island of Luzon. The storm's death toll countrywide was 88 by Thursday, police said, most from the landslides.
A major recovery effort was underway in Itogon at a small mining site, where the bodies of 21 people, mostly miners, had been found by late on Wednesday.
Rescuers looking for 53 people buried since Saturday say there is little chance of finding survivors.
Rescuers in Cebu on Thursday had heard cries and shouting from under the rubble, media said.
"I was sleeping when I heard a loud noise," said Vhann Quisido, who had a lucky escape when a tide of earth and rocks stopped behind his house.
"I was waiting for the land to come into our house. It was very traumatic," he said by telephone.