Oman’s commitment to peace, message of Islam highlighted in Paris 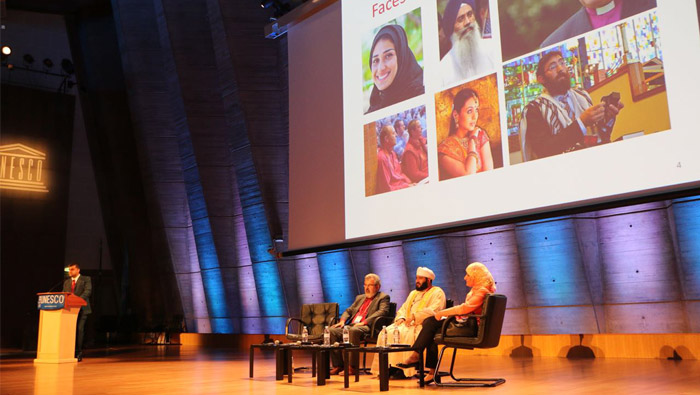 Paris: The Sultanate of Oman’s commitment to peace among the world’s different religions and beliefs was profiled to a global audience at UNESCO headquarters in Paris, France.
Oman’s groundbreaking exhibition, “Tolerance, Understanding and Coexistence – Oman’s Message of Islam” was on display at UNESCO for the third time as part of the International Peace Conference sponsored by several member states.
A highlight of the conference was a panel discussion moderated by Dr. Samira Moosa Mohammed Al Moosa, Permanent Delegate of the Sultanate of Oman to the UNESCO, Mohammed Al Ma’amari, Scientific Advisor to the Ministry of Awqaf and Religious Affairs, Georg Popp, General Secretary of the German-Omani Association and Managing Director of Arabia Felix, Germany and Riaz Ravat, Deputy Director of St Philip’s Centre in the United Kingdom (UK).
The International Peace Conference was initiated by the respected Venerable Master Chin Kung of the Pure Land Buddhist tradition. Master Kung has a global following and commented that, “The exhibition is very important to humanity and I invite you to continue it”.
Dr. Samira Al Moosa added, that “Human values are sacred in the teachings of Islam” and Mohammed Al Ma’amari said, “Partnerships for the exhibition are expanding and our responsibility for its renewal and development is growing”. The exhibition was organised by the Ministry of Awqaf and Religious Affairs, in cooperation with the Permanent Delegation of the Sultanate of Oman to the UNESCO and continues until 21 September 2018.
The opening ceremony was held in the presence of a number of eminent personalities at the UNESCO. Those attending included a number of ambassadors, heads of religious centres, academics and religious and belief communities from France.
Dr. Samira Al Moosa, welcomed the efforts of the Sultanate under the wise leadership of His Majesty Sultan Qaboos bin Said and his responsibility to promote a culture of tolerance and to firmly distance away from violence.
Mohammed Al Ma’amari gave a speech in which he thanked the UNESCO for hosting the exhibition and the Permanent Delegation of the Sultanate to the UNESCO. He also thanked the Association of the Friends of Master Chin Kung at the UNESCO and the staff in the Sultanate and in Paris for their fruitful and effective cooperation.
Al-Ma’amari affirmed that the partnerships with various organisations and centres in the world are continuing to expand hundreds of applications are received to host the exhibition in different countries.
In his visit to the exhibition, Master Chin Kung who is 92 years old, expressed his thanks and admiration for the cooperation in organising the exhibition, which he said is in the interest of mankind.
He highlighted the need to continue to add new educational publications on the topic of tolerance and dialogue.
The exhibition included paintings, descriptions of Islam in public life, creative sculptures and calligraphy, as well as Omani antiques and historical artefacts.
In addition, the exhibition had electronic displays, which included all the contents of the exhibition in 18 languages, which were browsed and viewed through electronic touchscreens.
The panel discussion on the experience of coexistence, tolerance and understanding in Oman began with an introduction by Dr. Samira Moosa al-Moosa. She was followed by Riaz Ravat who presented a case study about the project’s impact in the UK.
This talk also included an interactive quiz, which set out to challenge the audience by encouraging them to think deeper.
Georg Popp spoke about the story of the exhibition since its inception in 2010. He pointed to 117 exhibitions in 35 countries. A remarkable achievement.
Al-Ma’amari then spoke about the values of dignified living and the modern renaissance led by His Majesty Sultan Qaboos bin Said.
He highlighted the foundations of justice, equality and common human values by referring to the Omani cultural heritage, trade, cultural openness and communication based on the exchange of interests.
The exhibition included details about previous campaigns such as ‘Global Messages’ - a worldwide initiative aimed at spreading a culture of coexistence and peace, tolerance and harmony through the publication of cards expressing these values for social media and websites in different languages. These messages were published via hand-printed cards and were widely disseminated.
A significant part of the Omani presence was the launch and distribution of ‘World Religions – Colouring Book for Kids’ which was given to each of the 500 delegates in attendance. This proved to be amazingly popular with additional copies being given away to cope with the demand.