Routes for the Ironman triathlon races in Oman have been announced 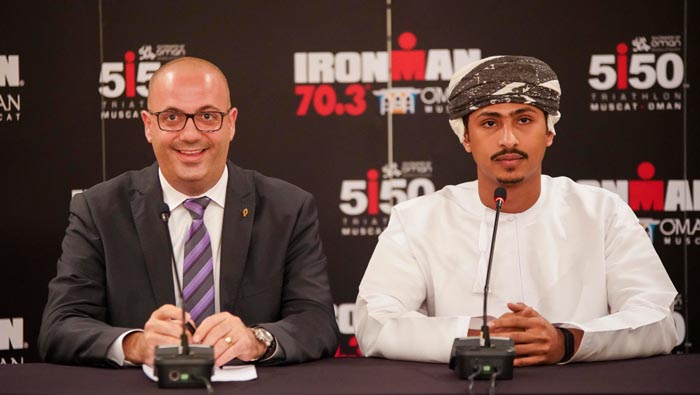 Muscat: Triathlon Middle East has announced the race track of Ironman 70.3 and the first ever Triathlon 5i50 which will take place in November 2018.
The race track starts from (The Race Village) from Jawharat Al Shatti and Oasis Mall in Qurum. Athletes will first begin the competition with a swim of 1.5km in the calm, clear waters of Muscat’s iconic Al Shatti beach in Qurum.
Al Shatti is also the location for the bike transition, from which athletes will race on a bike route, passing major landmarks in Muscat, including the Royal Opera House Muscat, Muttrah Gate and the Corniche, the Al Bustan Palace and the Wadi Al Kabir Road.
The last part of the race will be a run over 10km on a four-lap course, passing by Shatti Al Qurum, Royal Opera House and going back to the first lap in front of Jawharat Al Shatti.
“The race track was chosen according to the international standards of Ironman Company, World Corporation and Global Triathlon in Europe, Middle East and Africa,” said Mohamed Al Obaidani, Race Director and Chief Executive Officer of Triathlon Middle East.
He added: “The Sultanate is rich with mesmerising tourist attractions and a heritage that makes it the perfect destination for this kind of events.”
Al Obaidani added, “Triathlon 5i50 could be considered a training platform for Ironman 70.3 that will take place in March 2019. Registration for it is open to individuals and teams from Oman and abroad.
It was announced that Omran will be one of the sponsors of the championship, along with the Intercontinental Muscat Hotel and Crown Plaza Muscat - Oman Convention and Exhibition Centre. Triathlon Middle East announced earlier this year that the Sultanate is hosting this event for the first time in its history.
Ironman, a Wanda Sports Holdings Company, together with Triathlon Middle East, is supported by the Ministry of Tourism (MoT).
Triathlons consist of three strength competitions, including swimming, biking and running. They all require a high physical strength and focus that can only be achieved by strong determination and training.