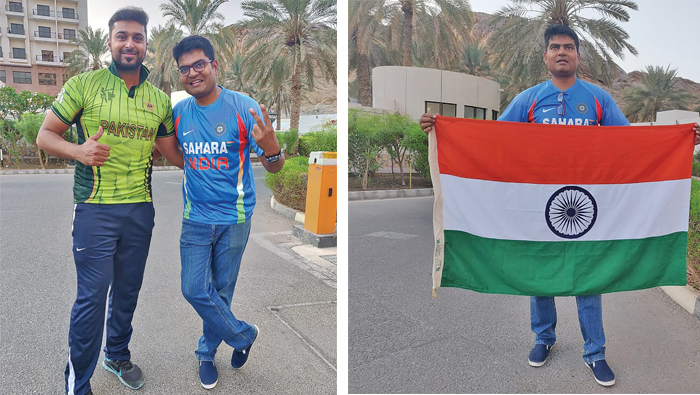 Muscat: Indian and Pakistani expats are travelling in droves to watch their cricket teams play each other at the Asia Cup match, to be held today in Dubai. India and Pakistan are arch-rivals, and will renew their rivalry at Dubai International Stadium, with the match set to begin at 1530 hrs Gulf Standard Time.
One of those travelling to Dubai from Oman to see the game is Shiv Gupta, an Indian expat living in Oman.
“There are about six to eight of us going as part of this group from Oman to Dubai, and I know that there are many others who are going, as well,” he told the Times of Oman. “We had made our plans for this journey a good two to three weeks ago, so my friends applied for their visas and got them immediately. We will be joined by about 15 to 20 of our friends from Dubai, so we are all super excited for the game.”
Gupta, who is also a cricket coach, added: “It was difficult for me to get an Indian flag for the event, but I finally managed to get hold of a seven-foot long flag to wave at the game, as well as an India shirt, and when my Pakistani friend saw me do all these things, he arranged a shirt for himself, as well, so there is a lot of excitement about this game.
“These countries don’t play bilateral series against each other anymore, so this is the only time we get to see them in action.”
So far, the two teams have played 196 matches against each other, with India winning 67 of them and Pakistan gaining the upper hand with 86 wins. A further 43 have ended in a tie. However, it is worth noting that Pakistan has never beaten India at the World Cup, with India winning all the six of their previous encounters.
The last time the two neighbours played against each other at a World Cup was in the 2015 ICC Cricket World Cup in Australia.
Tickets for the game were sold out online within 12 minutes, and that game saw India score 300 runs, and then rout Pakistan with a score of 224 all out in 47 overs.
“I am super excited to stand and sing the national anthem before the game begins,” added Gupta. “There is no other feeling like that in the world. Normally, Pakistan fans are given tickets in the Green Zone and Indian fans are placed in the Orange Zone, but this time, I think we will all be sitting in a mixed fashion because there is no political agenda here among any of us.
“We are all expecting a good game of cricket and I hope Pakistan wins the game, but I think whoever wins the game will be the team that plays well,” said Hassan Siddiqui, a Pakistani expat travelling to Dubai.
Another Indian expat, Dayan Ipe noted, “Last time, Virat Kohli was the man who shone for India, but he has been rested for this game so I hope the others, like Rohit Sharma, will step up and do their country proud. I am hopeful that India will qualify for the knockout rounds, because I am staying for the game on Sunday, as well, when all four of the qualified teams will play against each other.”
Pakistan has already played their first game of this year’s Asia Cup, beating Hong Kong by eight wickets, after the East Asian side could only manage 116 runs after being bowled out in 37.1 overs, a total Pakistan overcame inside 24 overs.
While India, Pakistan and Hong Kong make up Group A, Bangladesh, Afghanistan and Sri Lanka are part of Group B. Surprisingly, Sri Lanka has lost to both their opponents in that group, leaving them at the bottom of Group B and facing elimination.