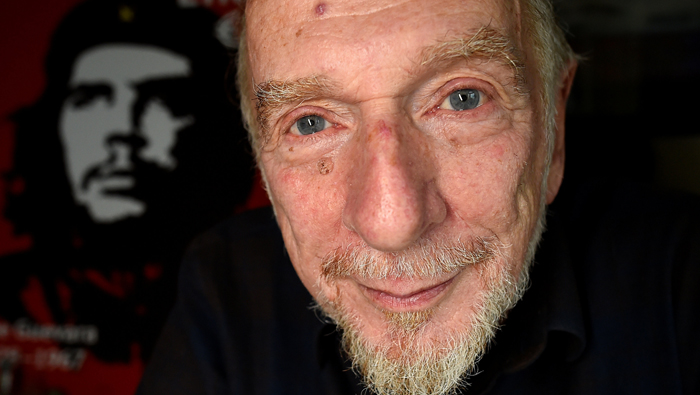 Dublin: Fifty years after creating the Che Guevara poster that still adorns student bedrooms around the world, Irish artist Jim Fitzpatrick is delighted at its ubiquity, but concerned at its exploitation for commercial gain.
Fitzpatrick created the image in 1968 from a photograph of the Argentine Marxist revolutionary taken in 1960 by Cuban photographer Alberto Korda, and made it available for free to anyone who wanted to use it.
It was quickly adopted by left-wing movements, appearing on T-shirts, posters and leaflets, but has also been used by companies to brand products - something that annoyed Fitzpatrick and pushed him to reclaim the copyright in 2010.
"It didn't bother me at first, I couldn't give a hoot who was doing T-shirts," he told Reuters. "But when a big commercial company, like a cigarette company, who have literally stolen my image, produce cigarette packs with my image twisted around the other way, left to right, as though that solves the copyright problem, then I have severe problems, because I detest that kind of commercial exploitation."
Speaking in his home studio in Sutton, north of the Irish capital Dublin, Fitzpatrick recounted how the image was created. "I did a couple of posters of it, but the one that matters, the red and black one that everyone is familiar with, the more iconic one, that was done after (Guevara's) murder and execution while a prisoner of war, for an exhibition in London called Viva Che," he said, referring to Guevara's death at the hands of Bolivian forces in 1967.
"The Che is very simple. It's a black and white drawing that I added red to. The star was painted by hand in red," he said, displaying a large print of the image. "Graphically, it's very intense and straightforward, it's immediate, and that's what I like about it."
Fitzpatrick said he offered the copyright of the image to the Guevara family, who have not yet returned the documents necessary for him to turn it over to them, and that he may bequeath it to a local charity instead.